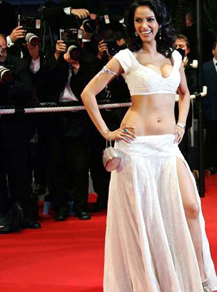 Actress Mallika Sherawat has emerged as one of India's top film stars, after starring in the 2004 film Murder , in which she performed “daring” kissing scenes – explicit portrayals that could not be found in Indian movies prior to that time. Murder , a suspense film about a woman involved in an extramarital affair, caused a lot of controversy across the country when the film was released.

With a slim figure and bright smile, the 25-year-old could capitalize on her beauty to sustain her popularity. However, she is not satisfied with it as she is proud of taking a prominent stand to lead a new India.

Sherawat's father, a landlord in Hariyana State, a conservative agricultural area in the northern part of the country, has not spoken to Sherawat since her film debut in 2002. It does not concern Sherawat at all, though. She says she is supported by India's younger generation, who have had their eyes opened to the world via the Internet and satellite TV, adding that they are different from the hypocritical older generation.

Indian movies are called “Bollywood movies,” as Bombay, now known as Mumbai, has been compared to Hollywood. In the commercial city of Mumbai, movie studios are everywhere.

There is an established pattern in Indian movies that has been followed for decades. Lovers are finally joined together after overcoming differences in family lineage and social positions, and family bonds are respected. In many movies, song-and-dance routines are crammed in, even if they bear no relation to the scenes that precede or follow them.

This is because the movies have to be entertaining and have a broad appeal in the country. Kissing and sexual scenes have long been taboo with audiences due to social conventions.

Over the last few years, new, experimental movies such as Murder have become more prevalent. After India liberalized its economy in 1990s, foreign film releases, especially Hollywood movies, increased in the country.

Such a new trend for Indian movies is supported by those aged 35 years old and younger, who make up about 70 percent of the population of 1.112 billion (2006 estimate). Most of them grew up in the 1990s during the high economic growth period associated with the Internet, mobile phones and cable TV.

Since the country is a rare example of a society dominated by young people, moviemakers have focused on “strategies toward young people.” In 2006, various public relations events that utilized digital media as well as advertisements through corporate tie-ups, bore fruit and major hit movies were released in quick succession, making it the greatest year in the history of Bollywood.

The movie world in India has started to reflect changes in the country – urbanization, the spread of the nuclear family and advancement of information technology.

One reason behind the growth in status of Indian movies in recent years is the high level of animation and visual effects using computers, reflecting the country's IT strength.

Rhythm & Hues, a special effects and animation studio based in Los Angeles, established an overseas subsidiary in Mumbai in 2001 to meet increasing demand. Special effects depicting vivid backdrops in The Chronicles of Narnia: The Lion, the Witch and the Wardrobe and Superman Returns were produced at the Mumbai studios.

According to Saraswathi Balgam, director at Rhythm and Hues India, the parent company first looked at Australia and Canada as locations for setting up a subsidiary, but Mumbai was finally selected for its moviemaking tradition and abundant human resources.

Toonz Animation India is an animation production firm based in Thiruvananthapuram, formerly known as Trivandrum, the capital of southern Kerala State, about 1,200 kilometers from Mumbai. The company announced in December it will produce the animated movie Dragonlance with Paramount Home Entertainment and Commotion Pictures. Voice actors for the film include Kiefer Sutherland.

Jayakumar also places an emphasis on swashbuckling films for domestic audiences, such as one in which the Hindu divine monkey Hanuman is the hero.

India itself is a large market with 300 million children aged 12 years old and younger, says Jayakumar. In addition, the purchasing power of ethnic Indian residents who spread from East Africa and the Middle East to Southeast Asia has been increasing. The vastness of the demand for children's entertainment is immeasurable.

“If we let our guard down, they may surpass us,” a concerned senior executive of a major Japanese animation firm says.

However, while Bollywood has been increasing its international profile, many critics point out its Achilles' heel – lack of storylines. Among hit Bollywood movies there are many films that blatantly copy Hollywood movies.

Mahesh Bhatt, who directed and produced Murder , says Bollywood has focused too much on entertainment at the expense of depictions of Indian history or social problems.

“There's no denying that Bollywood ... has become an identity which is linked to India and rising aspirations of the Indian people,” he says, before adding that, unlike films from South Korea and China, Bollywood has failed to make inroads into markets dominated by Western movies.