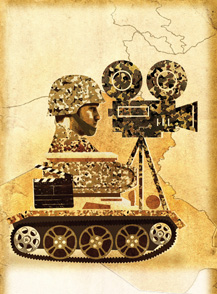 War films emerged from this year's Sundance festival in rapid succession. They didn't raise their voices much; Fahrenheit 9/11 -style polemics were nowhere to be found. Instead, the new wave of Iraq films expressed concern and quiet disbelief about a conflict that won't be ending anytime soon.

No End in Sight , a comprehensive look at the war from initial occupation to the present, was joined in the documentary competition by Ghosts of Abu Ghraib , which is scheduled to air on HBO Feb. 22. In the dramatic competition was Grace Is Gone , starring John Cusack as the pro-war widower of a woman killed in Iraq. In the shorts bracket was Jesus Beltran's The Grass Grows Green , about a Marine recruiter dealing with the combat death of a recruit.

According to Charles Ferguson, the director of No End in Sight , the time is ripe for the new batch of war movies. He says, “The public is at a point where we all understand things aren't going well. I don't think there's much of an understanding of how badly mismanaged the occupation was. I certainly hope the public will be more receptive to looking at an examination of how we got here and what the situation actually is.”

The first wave of Iraq films, including the documentaries Gunner Palace (2004) and Occupation Dreamland (2005), were gritty ground-level glimpses of young men and women at war. Jarhead (2005) touched on the current Iraq war through the absurdist prism of the first one. The 2006 crop included two Oscar nominees in the documentary category – My Country, My Country and Iraq in Fragments – and Home of the Brave , a Samuel L. Jackson film about the return home of three soldiers after a long tour in Iraq.

But much as the war has morphed from formal battle to turbulent occupation, the new films about Iraq reflect current circumstances. Disagreements with the administration's war policies aren't branded treason as often as they once were, and more information about the war has risen to the surface.

Are these political films? The question seemed to follow most of the Iraq movies here at Sundance, including Grace Is Gone , the story of Stanley (Cusack), a staunch war supporter struggling to tell his two young daughters that their mother has died in combat.

The film isn't particularly confrontational, and it should have broad appeal. But Cusack bristles at the suggestion that it's apolitical.

“It's apolitical in the sense of ‘I have to be an angry liberal yelling about this,' Cusack says. “But I think it's anti-war. It's exploring grief which I think is in itself political because we're trying to shovel all that under the rug.”

Like Grace , The Grass Grows Green is about the ways that grief can shatter one's perceptions. Grass follows Staff Sgt. Lobos (Santiago Vasquez), a Marine recruiter, on the day he discovers one of his recruits has been killed in Iraq. He still has a job to do, and we see him going about his business at the local barbershop, looking for potential members. But the news eats at him and makes the war more personal than before.

Grass succeeds in making war human. According to Rory Kennedy, director of Ghosts of Abu Ghraib , it's a task for which cinema is particularly well suited.

“I think film can do something that can't be done as effectively in print, which is reach into the hearts of people,” says Kennedy, the youngest daughter of Robert F. Kennedy. “There's something about seeing somebody onscreen and being able to really empathize and open your heart up to what they're saying that sticks with you in a way that words on a page can't.”