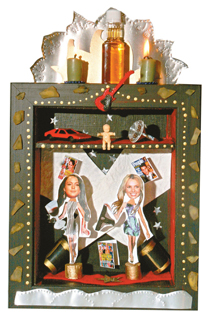 Paris, Paris, Paris. Are we not sick of the Hilton heiress's foibles? Yet celebrity gossip, says sociologist Joke Hermes, thrives in democratic societies where there's a sense of “cosmic justice.”

With the Golden Globes just behind us and the Academy Awards on the horizon, it's the season for the glitz, glam and gossip of the celebrity world. Will it be Jennifer Hudson for Dream Girls ? Or Leo for Blood Diamond ? And, omigosh, what will everyone be wearing on the red carpet?

While worshipping the golden calves of Hollywood isn't exactly a new sport, the time has come, dear citizens of America, to go where Lindsay Lohan has bravely gone before: We must admit we have a problem.

We are all addicted to celebrity gossip.

OK, sure. But the statistics and the sociologists tell a different story: In the past five years, the marketing of celebrity culture has skyrocketed. And with the likes of Paris Hilton and Britney Spears hogging the spotlight on that ignominious stage, the Hollywood gossip scene has precious little to do with acting.

Gossip weeklies like Us , In Touch and Star all report substantial increases in circulation since 2003, collectively selling about 50 percent more subscriptions and single copies in the past 2-1/2 years. E! Entertainment Television reports a 17 percent increase in the average number of viewers since 2001. And that is to say nothing of the gossip blogs like Gawker and Perezhilton that continue to cultivate a cult readership.

With even hardcore news sources like The New York Times and NPR reporting on Kevin Federline's Brit-less infamy, rare is the blissful American who still thinks K-Fed is a brand of dog food.

So the evidence is clear: We love celebrity gossip, whether we're going to admit it or not.

“Maybe it's because celebrity gossip is easy to talk about. At a party, when you can't really discuss politics, you can always talk about how Paris Hilton is crazy,” suggests Chris Rovzar, entertainment reporter for the New York Daily News .

Or maybe it's because “celebrity gossip articulates a collective public discourse that's both necessary in a democratic society and reflects an individualistic ethos,” offers P. David Marshall, professor of media and communication studies at Northeastern.

Hold the phone. An articulated discourse that reflects the ethos of what, now?

According to a coterie of sociologists, anthropologists and political scholars – many of whom have contributed essays to Marshall's recent compilation, The Celebrity Culture Reader – celebrity gossip also serves a social and political function.

In the olden days, most people lived in small towns and everyone knew each other's business. The conversation about what was acceptable behavior and what wasn't was occurring naturally, in diners and at church picnics.

But since WWII, we've all been steadily moving away from these small towns into big, impersonal cities and suburbs. Many of us don't even know our neighbors. So in the absence of small-town gossip, we have Hollywood, where we keep tabs on 40 or 50 regular faces in the weeklies.

And here's the sociopolitical part: By gabbing about celebrities' personal lives, we are participating in a nationwide debate, determining what is and what isn't acceptable behavior on a national stage.

Sure, a public discourse should address more serious topics but Marshall insists it should also address the issues that affect our personal lives but don't make it on the 5 o'clock news. Issues that define our communities' values – like how we define good parenting, or appropriate social drinking or the female body image – require other outlets.

For example, Britney Spears' almost dropping her child gives us a perfect excuse to discuss the criteria of good motherhood.

Point taken. So what if we're all gluttons for rich people's misery? Hey, sociologists, what does that say about us?

According to Hermes, celebrity gossip thrives particularly in democratic societies where there's a sense of “cosmic [rather than political] justice” when things go badly for the rich and famous. It's a reminder that “in the end, all human beings are equal, whether they are rich or poor, whether they live in the glittery world of show business or whether they only read about it,” he writes.

Of course, watching the rich and beautiful self-destruct is only half of it, Marshall adds. We also love to look at their pretty dresses and their pretty make-up and live vicariously in their pretty, gilded world.

So at the Academy Awards, when we pore over the dresses and the red-carpet back story, we're actually engaging in a national discussion to unify our values? We're reaffirming the democratic order? We're celebrating the American Dream?

“Or maybe it's just the pure train-wreck factor. It's like, most of the time you watch with one eye closed thinking, ‘Oh, no. What on earth are you people going to do next?'”