American Eyes: Seek a Community of Bands and Zealous Fans 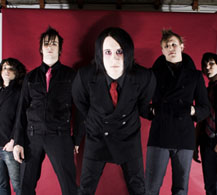 A little drummer humor from Oliver Gold – the skin beater of L.A.-based punk band American Eyes – a band whose humor extends beyond bad jokes, and whose mission is both personal and communal. A mission that has evolved out of being veterans of Los Angeles’ increasingly disjointed music scene.

"Bands have to stop looking at it like a competition," singer Dave Zonshine explains about L.A.’s music scene. "And no one comes to hang out – they sit there for an hour, then leave.

"Seattle was a scene. Pearl Jam got big, and then all [the other Seattle bands] did. What would you do if there was one band you wanted to see and no one else (on the bill)? Next time they play, you’re gonna be like, ‘Oh, I already saw them.’"

Which is at the heart of L.A.’s music scene troubles. According to the boys of American Eyes, it’s the lack of community that keeps people from remembering bands worth going to see again. Having toured the country four times, American Eyes has seen a variety of music communities, returning with stories of underground scenes that would make devoted music fans in Los Angeles green with envy.

"My favorite’s Seattle," confesses Chris Cogen, one of the band’s guitarists. And what’s so great about the famed city of little sun and gloomy music? Zonshine describes the difference.

"We went there and had kids singing along … these are songs they got off the Internet. They went out of their way to download them."

But besides the kamikaze zeal of fans outside of our hometown, the real difference lies within the bands themselves.

"In Seattle, all the bands are friends. They’ll all do shows together and after the shows, we’d go to parties. All the bands would come out and party. It’s a big community," explains Cogen.

The solution, according to Zonshine, is in the hands of the bands themselves. American Eyes believes they’re doing their part.

Ruby Tuesdays are free, all-ages shows at the Key Club put together by Filter magazine and Indie 103.1. Zonshine explains the band’s participation and touts the nights’ virtues.

"It’s awesome – the best thing in L.A. It’s the best opportunity for bands to play. [The Key Club] says, ‘Hey, we understand it’s hard for bands to start out,’ so they’ll put up a few shows to bring kids out. [Bands] don’t have to sell tickets."

And Ruby Tuesdays have been working well for American Eyes.

"When we started out, we had like 50 people at the show. Each week we’d watch the numbers double and double at every show," explains Zonshine. "I have the video, and you can see the floor of the Key Club. [People] can’t move, it’s so packed. It looks like a social scene."

A social scene is indeed what the L.A. music community needs to revive if the old glory days of local band success are to return. Though it may not look promising yet, nights like Ruby Tuesdays and bands like American Eyes are doing everything they can to make music in L.A.’s underground worth listening to again.