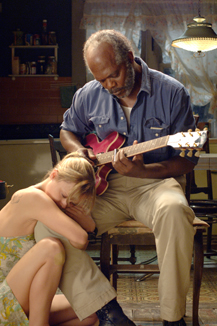 Whenever a director goes digging for cinematic titillation, there's a chance he might hit pay dirt in exploitation. The story is all too common.

You know, the one with the bouncy breasted vixen making her play as a serious actor with a sex-charged performance, or scenes of extraordinary violence “justified” by character motivation and plot, or gross appeals to cultural archetypes (if not their speaker-ready cousins) that can only confirm our previous understandings rather than illuminate them. Exploitation manipulates at the expense of substance, taking the grease-palmed thrill over the thoughtful consideration, selling out characters in appeals to our base instincts and low brow obsessions.

What makes Black Snake Moan a great film (rather that just a lip-smacking salacious one) is how it takes all these cheap seat-filling tropes and ties them together in a surly knot of blues mythology and local color, giving weight to the subject without draining any of those precious and pulpy entertainment juices.

There is a foundation of depth to this tale – southern, rural and contemporary – based around the curious relationship of a scarred young nymphomaniac named Rae, and Lazarus, a middle-aged black farmer and former bluesman, whose wife just left him for his brother. Of course, describing the film in these blank terms paints it 10 kinds of ridiculous, which begs the question: Just how does this film manage to defy its root tawdriness so gracefully?

The first answer to that question is Christina Ricci. As Rae, Ricci burns through the screen, boiling over with turmoil and defiance; the classic sex victim-turned-sex addict. Yes, Ricci is naked in the film, and yes, it is pretty damn hot.

But her performance is more than just a bra and panty show, Rae is the most dynamic character in the film. This is not just because Ricci is gorgeous (which she is), it's because she did her homework.

“The more research I did about her situation and survivors of sexual abuse as children, the more I came to understand what she would be feeling and the things that would be motivating her, the more compassion I had for her ... I just completely fell in love with [Rae],” she says.

Ricci felt she had to inhabit Rae to do the character justice. Asked is she was scared about having to be naked or near-naked for a large part of the film, Ricci replies, “I really had to have the attitude of never thinking about my body … so you just do that. You just say, I'll leave my body image problems and self-consciousness at the door.”

To do otherwise would lessen the effect of the character. “Because I don't want any self consciousness to be read on camera; it's not appropriate,” she adds.

It's not “appropriate” because Ricci felt an obligation to take Rae seriously. “I felt an incredible moral responsibility to people who have suffered childhood sexual abuse. There's definitely a sense that you need to do this right, and you need to do this justice,” Ricci remarks.

Rae manages to avoid being exploited like so many 2-D characters with 3-D breasts, and Ricci is due no small amount of respect for her assiduous preparation.

It also doesn't hurt a pulp flick looking to put some dramatic meat on its bones to get a veteran actor to play the male lead. Samuel L Jackson – as usual – is the man of this film.

He portrays the morally centered Lazarus, an anchor to the flight-inclined Rae in both the literal and figurative sense. He kicks some ass, shouts some swear words and even plays some blues guitar.

Jackson was able to draw on his own experience for the part, looking back to his days growing up in the segregated south. According to Jackson, his character Lazarus is “very reminiscent of my grandfather and his brother who were farmers and guys who I spent a lot of time with when I was kid, who had very strict moral guidelines,” but who at the same time “were still hard drinkers on the weekend … They played music, sang and told me stories.”

Of course, the force of this acting duo would be nothing without Craig Brewer, the writer/director who exploded out of near obscurity with his feature Hustle & Flow . Similar themes of music and the depiction southern life that are prevalent in Hustle & Flow are taken in different directions in Black Snake Moan .

Brewer explains his aesthetic for the film as an update or paean to a style with all sorts of precedents: the southern gothic. “In the south at least, we're attracted to the grotesque and the outrageous. Sometimes it's in our own families, so it's hard not to have some true love and affection for some rather extreme characters,” he explains. “If you look at some of the work that I'm attracted to … there is a sort of outrageousness.”

Among those mentioned were Erskine Caldwell, whose novel Tobacco Road depicts a family that's so poor they salivate over raw turnips, and Flannery O'Connor, in whose short stories one can find a bleakly comic vision of the south. In O'Connor's tales blind retarded girls are married off to one-armed conmen, and various other perversions are colored with a streak of the religious.

Brewer depended on his actors to make his vision relatable. “There is a Samuel L. Jackson performance, there is a Christina Ricci performance. But I think what excited them [was the] opportunity to go one step further with it and really create iconic looking characters,” he says. Because clearly “this is not necessarily a realistic portrayal of the daily lives of southerners – I assure you we do not chain up our women.”

The trick of making this film work, Brewer adds, was “getting actors that could be bold, but at the same time, that audiences allow to be that bold, in a rather outrageous scenario.”

So even if the movie posters have Ricci's Rae, the sex-abuse survivor in various poses of wan excitement against a dime-novel backdrop, and even if there are promotional hats about the movie stitched with “It's hard out there for a nymph,” what is really being exploited in Black Snake Moan is the audience's expectations.

Or as Jackson puts it, “I know what you want, but Craig gave you what you got.”