Flashback: James McAvoy Parties Like it's 1985 in Starter For 10 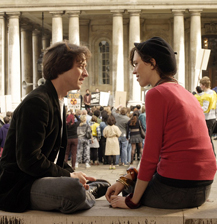 Despite the fact that most college students were in diapers during the ‘80s, there's something about the big-haired decade that people just can't get enough of. It's no surprise that Hollywood continues to capitalize on the '80s craze no matter what a person's age – from teens and 30somethings watching VH1's “I Love the '80s” to 20somethings catching the latest '80s flick to hit the market, Starter for 10 .

Starring The Chronicles of Narnia: The Lion, the Witch and the Wardrobe's James McAvoy (Mr. Tumnus) and produced by Tom Hanks, Starter for 10 is the great British teen '80s movie that never was. Based on the novel by David Nicholls, the film follows working-class student Brian Jackson (McAvoy) as he navigates his first year at Bristol University.

Like all honest coming-of-age stories, Starter for 10 is ultimately about its hero discovering the difference between knowledge and wisdom. “He's a brilliant everyman – someone trying to fit in – and I think that's something we can all relate to,” remarks McAvoy.

The universal feeling of trying to figure out where you belong in life gives viewers who may not remember the '80s that well something to connect with during the movie. However, despite being a so-called '80s film, Starter for 10 doesn't fall victim to the usual genre clichés.

“Something I felt very strongly about from the beginning is that I didn't want Starter for 10 to be a cheesy '80s movie where the viewer spends the whole time laughing about haircuts and shoulder pads,” says director, Tom Vaughan. “Rather than adding the '80s, what I did with the costume, production design and set departments was remove elements that were too modern. Our feeling was that this is a classic story that could be told anytime.”

While McAvoy admits he was too young to remember much of the '80s apart from the decade's “amazing television cartoons” and “a pair of ill-fitting stone-wash jeans with Fred Flintstone and Barney Rubble on either side,” the 28-year-old actor agrees that Starter deals with a timeless subject, which helped him relate to his character.

“I identified with him, as I went through a similar process going from my home life to drama school where the people were just so different, and I ended up making several terrible Brian-like faux-pas,” he explains. “I responded to Brian's response: the effort that goes into trying to fit into his new surroundings. It's interesting because class transition can be a healthy thing, but not if it is your outright objective.”

Whether or not everybody can identify with Brian and his quest to fit in (some people were just born rich and popular), Starter for 10 is sure to have something for everyone. From “minging” (a.k.a. disgusting) dorm rooms to puffs of marijuana smoke, Starter for 10 isn't just an '80s movie or a coming-of-age comedy – it's a movie about college life at its best and worst.

“This story will appeal to adults who grew up in the '80s, anyone who has gone through higher education and anyone who's tried to fit into something they weren't meant for,” McAvoy concludes. “It's not your typical teenage gross-out comedy.”