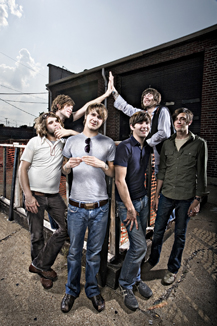 Chiodos keyboardist Bradley Bell just might be totally clueless. Ask him what sets his band apart from the hundreds of other bands with similar sounds and personal styles, who frequent the same incestuous circles of touring partners, and he'll reply with a verbal shrug and tell you simply, “It's not anything generic.”

But that short statement may be what sets the Michigan-bred rockers apart from the rest of the pack. While every other band may apply it to themselves, Chiodos is one of precious few that it actually holds true for.

OK, maybe “clueless” is a harsh adjective, but if Bell has any realization that his band might be the best thing happening to their scene right now, he's certainly not letting it on and definitely not about to let any statements of such go to his head.

Indeed, with all their metal riffing, prog-y instrumental arrangements and hardcore-tinged vocals balanced by a pop sensibility and thinly veiled love of the acoustic, Chiodos is something of a genre-bender. What has won over so many fans since the release of their Equal Vision debut, All's Well That Ends Wel l , however, is the band's ability to pull so many elements together with a creative integrity that is far too uncommon in its scene. And what keeps said fans sticking around is the humble approachability of musicians who may or may not have any idea themselves of how special their music really is.

“I like to think we have a personality to us that a lot of people can relate to,” says Bell, “You can tell through our songs and our live performance that we really put our all into it.”

Rounded out by drummer Derrick Frost, bassist Matt Goddard, guitarists Jason Hale and Pat McManaman and vocalist Craig Owens, Chiodos is very much an equal opportunity band, with full participation of all members in songwriting surely aiding in their ability to invest themselves fully in performing.

“All of us contribute equally to the songwriting process, there's not one person who does all of it,” says Bell. “We each come up with ideas on our own, bring them to practice and try to work off each other as much as possible. Then once we have the music done, me and Craig sit down and put the lyrics and vocals to it.”

Having been in writing mode as of late for their follow-up to All's Well, Bell admits that the formula for their new material remains the same, though the people involved are not quite the same ones who wrote their last album. “We've all grown up a little. We wrote all of those songs three or four years ago so these ones are fresh off our minds, and we all think we're a little smarter than we were back then,” he says.

“It seems like lately our last album has been catching on with a lot of people, so the more people catch on, the more you feel inclined to impress them with new stuff. But we're going to write the music that we want, not what everyone else wants from us,” he says of the difficulty of writing a sophomore effort. “You always feel pressure like, ‘Will people get this part?' Or, ‘Will they understand what we're trying to do here?' But we're trying to get over that writing block and just write music for ourselves.”

Having done a more than adequate job of that so far, the members of Chiodos likely don't have to worry too much about keeping their fans coming back for more. With a confidence that speaks more of his self-awareness than he otherwise shows, Bell says rather simply, “Whether you like us or not, we'll still be doing our thing.”