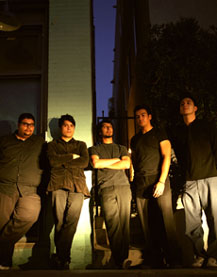 Below the radar of the local music industry and most live show attendees, L.A. has quietly given birth to a slew of bands hell-bent on being distinct in a city infamous for its vapidity.

Enter Ashbury, a band with music that can be described as brooding and introverted, obtuse and arty – music that A&R scouts are slowly becoming keen to, with the growing prominence of the likes of Midnight Movies and Autolux. Ashbury, a band most celebrated in the scene’s inner circles, has managed to stay low enough to reach out to a core group of fans.

Unlike the acts the band can most easily be likened to, acts that themselves suffer from comparisons to Joy Division (hint, hint) and the Velvet Underground for reasons of brooding and grandness, Ashbury’s inclination isn’t toward creating abstract, impenetrable art. Instead, the band’s sound points to the very apparent downsides of post-modernity.

"Isolation is relentless/A symptom of this modern age" goes "This Doubt Remains," the second song in their set for the night, and the condemnation is felt in the crowd. However, the whole of the band’s lyrics is never depressed, but observant, the presentation is never aloof or overly serious, but concentrated and thoughtful. Where performance is concerned, it seems to be the band’s signature strength to keep a stoic posture. The stance is best pulled off because the music is intense and controlled, and instantly gratifying.

Keeping a tight grip on their sound and stage persona paid off as their set came to a close with "Last Sensation." The song stands out more than any of their others, not only because of its slight meter changes and broken up pace, but also because it’s the one the band seems most involved with. The drumming, even and sophisticated, picks up from the beginning, with the guitar sounds more distinctly terse and accented.

If Ashbury should ever work their way past their underground status, the grandness of their sound may translate well with larger audiences. But for now, Ashbury seems to be a well kept secret best enjoyed in small, darkly lit venues.

Ashbury’s self-titled EP is currently available. Their second EP is set for an early 2005 release. For more information, visit www.ashburymusic.com.