Heather Graham: Takes the Wheels Off of Roller Girl in Gray Matters 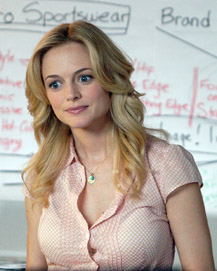 Heather Graham has come a long way since making her cinematic debut in late ‘80s films like Twins and Drugstore Cowboy . The actress, however, didn't really make any waves until Paul Thomas Anderson's Boogie Nights, in a performance that made Hollywood sit up and take notice. Her turn as Roller Girl led to memorable roles in films such as Bowfinger and Austin Powers : the Spy who Shagged Me, and the actress hasn't looked back since.

Graham returns to the big screen in Gray Matters , a coming-out comedy written and directed by Sue Kramer co-starring Tom Cavanagh (“Ed”) and Bridget Moynahan ( Sum of All Fears ). In the new feature, siblings Gray (Graham) and Sam (Cavanagh) are as tight as can be until Sam falls for and proposes to Charlie (Moynahan).

Sam's new fiancée has caused emotions in Gray rise to the surface – feelings for the same sex that she never really knew she had. One thing leads to another on one fateful (drunken) night in a Vegas hotel room.

“It was very fun to kiss Bridget. I was a little nervous, but she's a really good kisser. I talked to Sue's sister [who's a lesbian] and asked her, ‘what was it like the first time that you kissed a girl?' She was like, ‘suddenly everything felt right and just fell into place. But at the same time you're like oh no, what does this mean?'”

“When [Shannon] agreed to be in the movie, I was so happy because I've always wanted to work with her … it was really fun to just watch her,” Graham says with a smile. “She just has so much energy. I was like, ‘you're amazing!'”

“It's exciting when you work with actors like Alan [Cumming], this really celebrated Broadway actor – it's just fun to think, ‘oh, I'm in a movie with him.' I felt that way too about Sissy Spacek because, while growing up, she was definitely somebody where I thought, ‘wow, she's one of the best actors there is,'” adds Graham. “When you go to work and she's there, you're just like, ‘this is crazy.' It wasn't like when you meet someone [that you're going to act with] and you're really so excited to work with them and then it's just a huge let down. She was really cool.”

Winona Ryder notwithstanding, Graham is one of the few actresses who started working in films opposite Corey Haim and Corey Feldman who's still working on a regular basis, and the path that's gotten her to where she is today is not lost on her. When asked what's been her secret to surviving in the film game, she's quite candid.

“I feel really lucky that I've survived,” she states matter-of-factly. “It's a hard business. I try to do things that I feel excited about, and then when I do it, I want to make [the character] as real as possible because I like doing it. I guess there's a certain aspect of luck to it. I think it's a mixture of having talent and having luck.”