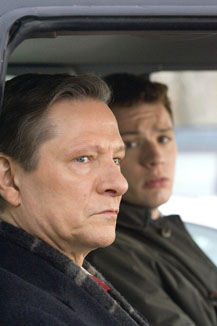 The problem with being routinely great is that people start taking your excellence for granted. Nobody is likely to take Chris Cooper for granted after seeing Breach , an uncomfortably claustrophobic real-life spy movie that gives the actor one of his juiciest roles.

Cooper portrays Robert Hanssen, the FBI agent who was arrested in 2001 after feeding the Russians classified information for two decades, single-handedly orchestrating the biggest espionage disaster in U.S. history.

Billy Ray's film is essentially a game of feints and dodging between two men. Young FBI agent Eric O'Neill (Ryan Phillippe) is not pleased when he's named the new assistant to Hanssen.

This is just the sort of dead-end assignment the advancement-obsessed O'Neill dreads. His mood turns darker when a bureau bigwig (Laura Linney) explains that Hanssen is suspected of being a deviant whose sexual practices pose a security risk. O'Neill is supposed to watch his boss for signs of misbehavior.

Sometimes it's all O'Neill can do to get through the workday. Hanssen is imperious, demanding and borderline abusive.

Hanssen resents the FBI gun culture which rewards the guys who knock down doors while sidelining those who sit at desks being thoughtful. He disdains the system that promotes the polite and politic while ignoring real genius – namely himself.

When O'Neill threatens to quit because he's wasting his time trying to find dirt on Hanssen, his handler finally reveals the truth. Hanssen has been in Russia's employ for years, and the bureau desperately wants to catch him making a drop of classified material. If O'Neill can make that happen, he'll be a key player in the biggest espionage case ever.

Even when the action moves outside into a gray Washington winter, things feel tightly constrained. There's almost no breathing room in this film, which makes Hanssen and O'Neill's game of wits nearly unbearable.

Good thing Phillippe and Cooper are up to the job.

We're supposed to identify with O'Neill, who in his quest to bring down Hanssen almost shatters his own marriage. And Phillippe is very good.

But a weird thing happens. Cooper is so convincing as Hanssen that he becomes the focus of attention. He's arrogant and a traitor, but he's also weirdly compelling, a blend of creepiness and self-assurance that has allowed him to take on and run circles around the American intelligence establishment.

Breach has a deep cast of supporting players, but in the end it's a two-man thespian slugfest. Phillippe and Cooper are more than up to it, reminding us that real espionage isn't about chases and gunplay but about the duplicity of the human personality.