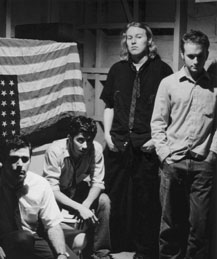 It’s not often you meet a band whose sole purpose is to empathize with the worst of your (very real and very irritating) plights. It’s even rarer to find a band that does so in an angry and rowdy enough fashion to get you out of your rut. The Business Machines, however, with their fast-paced rock songs and angry, driving lyrics, seem to thrive off those end-of-your-rope, "I’m destitute and pissed about it" feelings.

Self-described as "Texas-born, predominantly Hispanic, loud, broke people," Lucas Juarez, Alex Arizpe, Andrew Harper and Jerry Santos have created their own niche in the Los Angeles music scene. Originally conceived in Houston, Texas, the Business Machines have since worked their way up, making the big leap to L.A. armed with a heavy touring schedule and a debut album, Almost Automatic, produced by the great Steve Albini (Nirvana, Sonic Youth).

Of the band’s move to L.A., bassist Harper says, "It’s one of the toughest cities, but if you can make a name for yourself here, you can make it anywhere." It’s this kind of gutsy, determined attitude that makes the Business Machines so attractive to their fans.

Almost Automatic was recorded in early 2003, and was pressed and self-released by the band. "We recorded our album with Albini in Chicago in April of ’03. We had done close to six months of touring in that year, and it’s gotten to the point where we can establish ourselves as a hard-working band," Harper says. Often living out of their tour van, it’s obvious to see that the Business Machines are determined to make it and aren’t letting anything get in their way.

The band has come a long way since its original conception and release of their debut album. The Business Machines’ music, often referred to as "blues grunge" or, as drummer Santos prefers, "bluesy punk," has undergone a evolution since the days of Almost Automatic.

"I think our approach to songs is completely different now as opposed to the approach we took when we were writing the first album," Harper says. "The first album was just, ‘Let’s go make a really loud, rock, punk rock, rock ’n’ roll record, you know? I feel like now, maybe we just like each other more as people or something. It’s much more fun to write songs and shit."

Lead singer Juarez agrees: "Our songwriting is more diverse. All of us write the music, you know?"

The Business Machines have high hopes for their next album and already plan to top the charts. As Juarez jokingly says, "That’s what I want, ultimately – KIIS FM, Ryan Seacrest."

Almost Automatic is currently available. The Business Machines will play the Roxy on Dec. 13. For more information, visit thebusinessmachines.nstemp.com.