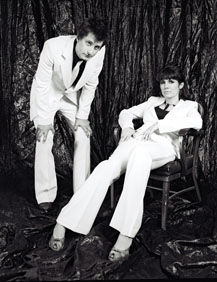 Crazy about Nashville may sound like a hokey country song title, but in reality it refers to the “all roads lead to” story for rock outfit Dead Rock West. With all signs pointing directly towards the land of Honey and Salt, the band has journeyed with go for broke e-mails, FedEx packages and a punk rock mohawk crammed in the back seat.

The wild man on the wheels is singer/guitarist Frank Lee Drennen. Though not crazy, Drennen says he thought he was when he wrote the initial e-mail to Grammy award winning sound mixer/engineer Richard Dodd (Tom Petty) asking if he would be willing to do the final integral part of the group's debut album: its mixing.

“We had just finished recording the record. We're loving this stuff, it feels really good, but we need to give it a rock spin, make it feel like rock 'n' roll and not get stuck in the Americana world,” Drennen says.

Dodd replied, interested in hearing the music. Astounded by the response, Drennen still had the wherewithal to FedEx the rough tapes to Dodd. Like the e-mail, Dodd could've just listened to the tapes and done away with it all. But as they say, it was a done deal; a deal done right.

“I was convinced that he wasn't doing it for the little money that we were giving him, that he wanted to be a part of it because he really felt that he had something to give to it that would help it come out more,” Drennen says. “He definitely did that.”

Six days were spent in Nashville where stories were shared, sounds were heightened and gawks at one particular hair motif were seen. Along the streets of Nashville, country-land U.S.A., stood Drennen adorned with a Travis Bickle inspired mohawk.

“A couple of nights before we went there I was working a session with a friend of mine in San Diego [for] a couple of days straight. We were so fried. To relieve the boredom I had this brilliant idea for him to shave my head and give me a mohawk. That made me even more nervous, but the people in Nashville were very gracious.”

Based in L.A., the band cannot deny rock roots like the Byrds and Buffalo Springfield. Even as crunchy jangle rock persists through the record (“I Really Wanted You”) the band's true evocative sound is Drennen's musical dream fulfilled where John Doe and Exene Cervenka from X meet Gram Parsons and Emmylou Harris.

If he is the male yin, his female vocal yang is Cindy Wasserman (vocals, starbourine).

“How she approaches singing, it's almost like she has this invisible antennae out to the gods. It's like she's wooing them, and it comes through her and out her voice,” he says. “How I approach it is more like a hunter, like I'm prowling around to hunt that connection down and kill it.”

That striking vocal interplay is most present on the aptly named “Burning House of Love.” With their acidic tongues, the duo powers through a wail of a chorus fleshed out by the musical muscle of the band's remaining players – Phil Parlapiano (mandolin, organ), Bryan Head (drums) and David J. Carpenter (bass).

Genre defying, the band, Drennen says, doesn't necessarily fit into the country, pop rock or even the strings accentuated rock scene. Case in point: “All I Know” with its tender strings accompaniment provided by L.A.'s the Section Quartet. It may sound crazy but Dead Rock West wants to do something different in a town that fits prototypical to the norms.

“We're our own thing,” Drennen says. “I really love that. I really believe in my heart that this music is made to be listened to, young and old. It's made to be on the radio. I don't want to write songs that are for some little clique.”

Honey and Salt is currently available. Dead Rock West will perform Feb. 21 at the Hotel Café in Hollywood. For more information, visit www.deadrockwest
Article posted on 2/21/2007
This article has been viewed 1404 times.