College of the Air: Education Behind Bars 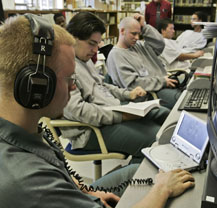 In some ways, Randy Gutierrez is like a lot of other 19-year-olds. The former varsity athlete is struggling through his first college history course with hopes of earning a degree.

The difference is that Gutierrez is behind bars at Kettle Moraine Correctional Institution for sexual assault. He's one of about 150 young inmates in more than a dozen prisons around the country who are taking classes and could even earn degrees from Milwaukee Area Technical College through a new federally funded program.

The MATC program, called College of the Air, works much like an online class or a correspondence course. MATC sends instructional videos to prisons in Wisconsin, Maine, Tennessee, Texas, Alaska, Minnesota and New Jersey through a satellite feed.

Inmates watch one hourlong video each week for 14 weeks. An MATC instructor sends assignments such as textbook reading, written papers and tests from Milwaukee. Students send their work back. The instructor gives written feedback by mail.

Meanwhile, a staffer at the prison monitors inmates' attendance, sends their questions to the MATC instructor and proctors their tests. Students pay $10 a course.

After they complete credits, students receive an MATC transcript that looks like they went to school in Milwaukee. Students who take enough credits can get associate of arts degrees from MATC. That degree would then enable them to transfer to the University of Wisconsin-Milwaukee once they're released.

MATC is one of several colleges nationwide that gets federal funding to educate young offenders. In Wisconsin, eligible inmates have to be younger than 26, be within five years of release and have a high school diploma or a GED.

Each state receives part of a $23 million national pot for the incarcerated youthful offenders program. The federal funds aren't new, but MATC's degree program is. The college already had the instructional videos as part of an old program that broadcast classes on public television.

The TV courses had quickly become archaic in the face of Internet learning. MATC was about to phase them out when the Wisconsin Department of Corrections contacted the college.

The state had access to federal funding to educate young inmates, but prisoners didn't have Internet access. MATC's videos seemed an ideal fit.

The college became partners with Corrections Learning Network and Correctional Education Association to provide the classes through an existing satellite network.

A one-year pilot program in five Wisconsin prisons proved successful enough that a dozen institutions in other states signed on. Now, MATC gets $325 a course from the federal government.

For inmates like Gutierrez, getting an education is about turning himself around.

“People are going to look at you like you are a felon,” he says. “It's something to show them that you can work and you can do just as much.”

Campus News
California State campuses with most COVID-19 cases have one thing in common – they like to party
1,655 views