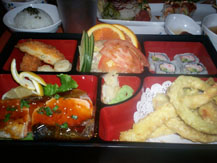 With the abundant selection of sushi bars to frequent in Los Angeles, it's quite rare to find one place that stands out from the rest. Besides offering the absolute freshest ingredients, there's not much more to ask of a sushi restaurant. But the Sushi Ozekii not only serves high quality food, it has made a name for itself with new and innovative sushi rolls presented with cutting-edge flair.

The word ozeki will only be familiar to you if you're a sumo wrestling buff. It refers not the supreme sumo master, but to the second.

The Sushi Ozekii's owners deliberately chose the name to remind themselves to never be content to rest on their laurels and to always strive to become No. 1. Keeping that in mind, they opened their first restaurant in Camarillo in 1999.

With only two sushi chefs and less than five employees, the Sushi Ozekii quickly gained a reputation for a humble and friendly approach to food and service. A second location opened in Ventura in 2000. Since then, it has been named Best Sushi Bar by the Ventura County Star a whopping five times.

Last March, the company reformed under franchise management and began plans to open more establishments. Both the Agoura Hills and Beverly Hills Sushi Ozekiis opened at the end of January.

Just around the corner from the Beverly Center, it might be a little hard to find the Beverly Hills location, but once you get there, it'll be well worth the hunt. Instead of having to pay $10 for valet or to park in a lot a few blocks away, there are ample metered spaces along San Vincente Boulevard immediately in front of the restaurant.

You can choose to sit at the small sushi bar, intimate dining room or cozy patio to enjoy your meal. The walls are painted a vivid orange, making for a lively atmosphere. Any of the areas are great for a party of two or 10.

One of the first things you'll notice when walking into the main dining room is the beer tap next to the hostess counter. A glass of Kirin draft beer is $1.99. Yes, that's right, only $1.99 all day, every day.

Both hot and cold sake is served in regular or several premium varieties. Wine is also offered by the glass or bottle, and in unusual flavors like raspberry and pomegranate.

Ozekii doesn't stop being unique with just the beverage selection. Once you open the menu your eyes will be overwhelmed by the plethora of dishes to choose from. Each listing has a photo and brief description of the menu item, so once you start looking you will definitely start salivating.

Japanese, Vietnamese, Spanish, Hawaiian and French cuisines are all fused together for appetizers like the Double Decker (grilled white fish on top of a crab cake finished with a cream cheese sauce), Ahi Poke and Ceviche Japanese Hamachi. It's fun to order some of these hors d'oeuvres, simply for the fact that saying their name will make you giggle. For example, there's Green Eyes which is asparagus wrapped with halibut, then deep fried.

The most eye-catching, though, is Eve's Temptation. Mashed pumpkin and potato are sculpted into the shape of an apple and covered in paper-thin slices of raw tuna. With its shiny red skin and sprig of mint garnish meant to be leaves on its top, the appetizer really does look like a delicious apple.

Honestly, nothing compares to the exquisite presentation of all the rolls at the Sushi Ozekii. Their special rolls are divided into three categories: fresh, tempura and baked, and most are just $10.75.

There are classic fresh rolls to choose from like the Philadelphia and Albacore Delight. Then, there are rolls like the Geisha (California rolls draped in pink radish), Ninja vs. Samurai (salmon vs. tuna topped California rolls) and Little Saigon (salmon, cucumber, cheese and red onion wrapped in rice paper) that are definitely Ozekii originals.

All of the tempura rolls pack a mean crunch. The Red Blossom is fantastic – shrimp tempura encased in a roll with zesty bits of fresh crab with spicy tuna on top.

Even those of you who don't like fish will be tempted by the baked rolls. There's Chi-Katsu with pieces of chicken cutlet, cucumber and red onion, and Little Chicken with teriyaki chicken, cucumber and crab.

By far, the Dynamite is the most famous. A California roll is smothered with bay scallops and mayonnaise, blending creamy, crunchy, sweet and savory all in one bite.

All of the lunch/dinner combinations are a steal at $12.95 and up for an incredible amount of food. You can choose two items from a list of chicken, salmon or beef teriyaki, barbecued beef ribs, chicken katsu, or shrimp and vegetable tempura.

You can order a sushi combo to get a taste of several regular sashimi offerings (tuna, salmon, yellowtail, albacore, scallop, snapper, white fish and octopus) plated on a small wooden boat. Each piece is presented in an artful way – even the lemon garnish is carved into something special at the Sushi Ozekii.

Date Night
Some first choices for dining in L.A. after last call at the bar
1,666 views