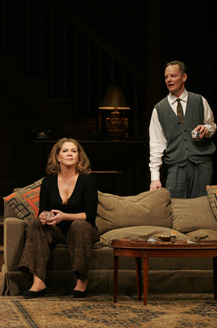 Note No. 715 for all students attending any American theater class: you're going to read a play from playwright Edward Albee.

The absurd wit that floats in every biting word said by the handful of Albee's most theatrical of characters makes the man a master. Albee shares the pedestal with the two other pieces of the absurdist holy trinity: Samuel Beckett and Eugene Ionesco.

Nothing could be more inane than having to decipher an Albee play using any number of possible theories (from feminist to Marxist) to decode his dialogue in a classroom. Maximize this pressure by having to relate said book to a handful of your peers, and it can result in a never-ending sea of “likes and   “uhms” floating from your mouth.

A majority of English majors/minors are forced to deal with the mortification lodged deep within their stomachs as they enunciate their interpretations. They can relate to one of Albee's memorable characters, George, from the play “Who's Afraid of Virginia Woolf?”

George's wife, Martha, in a bit of fun and games, explicitly scolds him as she expresses, “In fact he was sort of a … a FLOP! A great…big…FLOP!” Come to think of it, those English students have it so much easier.

Forty years since its creation, “Who's Afraid of Virginia Woolf?” continues to strike a chord with audiences alike. The proof is in the pugilistic three acts' ability, after seven Tony nominations and six Tony wins, to still draw crowds.

Rest assured, a line is now forming at the famed Ahmanson Theatre where another retelling of the classic play is being dished out with equal amounts of savage lashings from Martha.

Even a 1966 film adaptation directed by Mike Nichols and staring Elizabeth Taylor as Martha and Richard Burton as George rests in the annals of Hollywood. Rumor has it that the tempestuous relationship between both characters in the play was akin to that of Taylor and Burton's real life courtship.

Fans need not worry though about any real life drama amongst the actors in this current production. A dry living room becomes a boozed soaked war zone for the sour, yet incredibly scholarly, couple and their invited guests: Nick, a professor, and his wife Honey.

As the drinking escalates it becomes fuel for a three-act barrage of verbal and physical abuse. The madness finally alleviates when George sings the titular question.

While Nick and Honey are critical characters to the play, they, like the audience, are merely spectators for the wrestling match between Martha and George. Bill Irwin, who won a Best Actor Tony in 2005 as George, reprises his Broadway role as the seemingly mild-mannered professor.

After a few drinks in George's system, his often-quick quips become strengthened, making him a match for his empowering wife Martha (the daughter of the president of the university where George teaches history), played by the always-sumptuous Kathleen Turner.

Known as the voice of Jessica Rabbit and for slipping down mudslides with Michael Douglas in Romancing the Stone , this persevering actress lands a role which uses her endless star qualities perfectly. It's her unmistakable voice that makes her and Martha a match made in heaven.

Albee's dialogue is laced with the pungency of Turner's voice. It's certainly a sight to behold

The Ahmanson Theatre is located at 135 N. Grand Ave. in Los Angeles. Tickets: $20-$80. To purchase tickets and for more information, visit www.centertheatregroup.org.