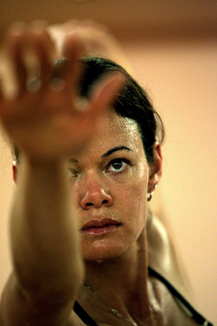 Normally, activities that come with a warning of possible dizziness and nausea should be avoided. Then there's Bikram yoga, a practice that involves stretching and contorting in studios with an average temperature of 105 degrees. Devotees say the heat has its benefits.

“The heat is to warm the body up so it can move more freely,” says Patrice Simon, owner of Bikram Yoga at the Camp in Costa Mesa, Calif. “It loosens the muscles up, helps with muscle recovery so there's less soreness. It's also a detox process. Sweating removes toxins.”

This style of yoga was developed by Bikram Choudhury and involves two breathing techniques and 26 poses that are always performed in the same order. Classes last 90 minutes.

Simon says that no yoga experience is required and that the best students are the ones that “start from scratch.”

“The whole premise in Bikram yoga is you do the best you can and you get a 100 percent benefit,” she adds.

We recently tried a Bikram yoga class at Simon's studio to see if we could stand the heat.

WARMING TO THE IDEA

I've been practicing yoga for a couple of years now, but had always avoided the Bikram style because of the heat. It just sounded wrong.

Stepping into the studio the first time, I wondered how I was going to make it through 90 minutes. But in less than half an hour, I started to get acclimated and didn't really think about the heat anymore.

Concentrating on the poses also helped distract me. It's a rigorous workout, but there are enough modifications of poses that beginners can feel comfortable.

There is no chanting in Bikram yoga. That, for me, is a major plus.

I didn't feel dizzy, but did start feeling a little nauseous in the first quarter of the class. I realized that a carne asada burrito isn't a good lunch choice when you plan on doing Bikram yoga later in the day.

I just sat on my yoga mat for a few minutes and the nausea passed. After class, I just felt good.

As a co-worker and Bikram yoga fan says, “Your insides feel like they've just had a shower.” —Erlina Tulabut

This so-called “hot” yoga was, for me, akin to putting on my workout gear, driving to Vegas and stretching on the concrete outside one of the hotels in the middle of summer.

Granted, Vegas can get a lot hotter than 105 degrees in the summer, and the studio we went to – Bikram's Yoga College of India in Costa Mesa – wasn't on concrete, thankfully. But you get the picture.

Judging from the number of Bikram-ees (about 20) at the class we took, this type of yoga does have a following. I felt a little like a fish out of water, flopping around in sweaty, dehydrated yoga positions. But everyone else, in all their heated glory, was quite all right, apparently.

ut of the four in our group who decided to subject ourselves to yoga poses in three-digit temperatures for 90 minutes, I was the only one who left the place disgruntled. The heat caused me to become highly agitated and I became increasingly annoyed every time the instructor would correct a position I was not performing to her standards.

The smell of stale sweat and my eyes stinging from the sweat running down my own face did not help. Needless to say, had I not been drained of all energy, I would have jumped for joy when the class was over. A weak smile was all I could manage. —Jessica Peralta

This was my first experience with yoga. And other than knowing the names of dubious moves such as “Downward Dog,” I didn't know what I was getting myself into. So I figured if I was gonna do it, I may as well go with a trial by fire: 90 minutes of yoga in 105-degree temperature.

It ended up being a good experience.

My biggest fear was that I would pass out from the heat, but after about 10 minutes I warmed up to it, pun intended.

My second-biggest fear was that I would be trying to force my body into positions that would make a pretzel envious. Luckily this wasn't the case, either. Though my form was far from that of those in the know, I attempted all the moves of the instructor and, viewing myself in the mirror, had at least a semblance of proper movement.

I left feeling relaxed and well. Bonus: The next day I awoke early and had a feeling of strength. Must have been all those toxins that got expelled with my hundred gallons of sweat. —Matt Degen