Big Battle: With a Successful Trip to Sin City Behind Him Frank Miller Gears up for War With 300 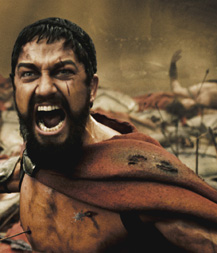 Three hundred men walk down from the hills of Greece to an ocean littered with ships as big as the Titanic, all scattered as far as the eye can see.

A Spartan speaks up, “There's so many.”

The king turns to his wary soldier with an evil smirk. “Good,” he says.

The odds were against them, and the attempt seemed more like a suicide run than anything to the people of Sparta, but what happened would change the face of the world forever.

300 is a story based on actual history; the battle of Thermopylae did in fact take place in 480 BC. But instead of taking a historic battle and giving it a real Saving Private Ryan -type feel, the project's creator, Frank Miller, took a different route.

The story is told as if it were to be passed between people sitting around a campfire, as most stories were told during the film's time period. We learn about the struggle between what a man must be and what absolute corruption can bring forth in the direst of times; a story that will be destined to repeat for all time.

300 is the brainchild of Miller, who created Sin City and The Dark Night Returns : two pieces of graphic literature that are regarded as some of the greatest works to date. But why create a graphic novel based on a battle that happened so long ago?

“All my life I wanted to tell this story because it's the best story I've ever encountered,” says Miller, “And, eventually, I gained the skills as a cartoonist, such that I thought I could finally handle it.”

To bring the story of 300 from the pages of his book to the screen, Miller needed some serious team members if he wanted to meet the same expectations that he built up with the success of Sin City . When producer Gianni Nunnari ( The Departed ) and director Zack Snyder ( Dawn of the Dead ) approached him, he was convinced that these were the men he needed in his own army to tell the beautiful story that he had been holding onto for almost his whole life.

“Gianni's persistence and Mark's dedication to this project convinced me. They were so determined and so believed in the story that they won me over. It was very difficult to say no … so I didn't,” says Miller.

The team wanted to bring the comic to life, not create a movie about the novel. They were determined to bring the audience into the book by creating a new style that had never been used in film before, “the crush.”

“Zack developed a recipe where you'd crush the black content of the image and enhance the color saturation to change the contrast ratio of the film,” producer Jeffrey Silver reveals. “Every image in this film went through post-image processing. The crush is what gives this film its distinct look and feel.”

With the effects and story in place, it was time to cast this epic movie. Reaching out to find the ideal king to lead the Spartans, the team brought in Gerard Butler ( The Phantom of the Opera ). This Scotsman had his work cut out for him.

They knew he could act as a king and could portray a true man, but to what extent could he embody the role? To remedy this initial hesitation, Butler went through three months of training on his own with a world-class mountain climber, Mark Twight.

Butler recalls the mind-body transformation, which they called the “300-rep Spartan workout.” Without resting between exercises, Butler would do 25 pull-ups, 50 dead-lifts with 135-lb dumbbells, 50 pushups, 50 jump-ups on a 24-inch box, 50 floor-wipes, 50 single-arm presses with a kettle bell and 25 more pull-ups.

So why would a person put himself through such hell?

Butler answers with a smile: “I've seen too many actors in these kinds of roles that have skinny arms or a slight belly, and if I wanted to be a king that led 300 of the best soldiers to ever walk the earth into a battle against a million, I not only wanted the audience to believe I could do it, but I wanted to earn the respect of the cast – and more importantly the trainers – as a leader.”

When you watch this movie, your girl may get a bit hot when she sees the massive army in their capes and not much more, and she will get even hotter when she learns that no effects or body suits were used; they are all real. In addition to the eye candy for the women, the female lead (Lena Headey of The Brothers Grimm ) isn't one's typical queen. She is as independent and unforgiving as her king … and as beautiful as the movie itself.

As the king sets out to battle, we meet the instigator of this war, self-proclaimed god-King Xerxes, played by Rodrigo Santoro (“Lost”). A full body transformation was required of Santoro to play the part of the Persian ruler. He had just come off a movie where he was playing Don Quixote and was emaciated, so bulking up for the role was an intense process as well.

“I had to get right to work and start bulking up in a small amount of time because I was going to be wearing mostly jewels and minimal clothing,” says Santoro. “And with the Spartans going through their training, I had to match them on some level.”

Overall, story, effects and intense bulking-up aside, 300 also features an ingenious soundtrack (a blend of metal, techno, classical and world music), and the sights and sounds of a true epic. Move over, Braveheart .