Ioan Gruffudd: Relives the Past with Presence in Amazing Grace 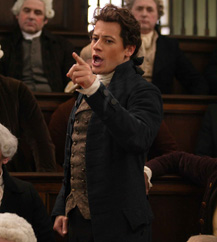 Chances are you've already seen Ioan Gruffudd (The Welsh name is phonetically pronounced Yo-wan Griffiths in English.) on a theater screen in blockbusters like Titanic , Black Hawk Down and more recently as the bendy Mr. Fantastic in the Fantastic Four . Currently, you can catch him in theaters in Amazing Grace , directed by Michael Apted ( Coal Miner's Daughter , Gorillas in the Mist ).

In Amazing Grace , Gruffudd portrays the British abolitionist William Wilberforce who struggled tirelessly with Britain's 18th Century-era House of Commons to abolish its ties with the brutal institution of slavery and the trading of Africans to the colonies in the New World. According to Gruffudd, it's a history lesson that many don't get to read about often in the U.S. or elsewhere for that matter.

“I didn't meet any of his family members or anything, although I'd been in touch with one of his great, great grandsons after he'd seen the movie,” Gruffudd says. “I read as much as I could about him, many biographies, just to flesh out the character. [Wilberforce] is not incredibly well-known worldwide although we know about him in the UK. I was slightly ignorant of him, personally, so I needed to research as much as I could to bring him to life.”

Wilberforce had to have a lot of minerals, imbued with a heavy dose of passion, in order to go against the grain of popular thought – namely, sugar barons with deep pockets (and ties in the British government) and British Parliament itself. This begs the question: what is the actor who's portraying him passionate about?

“I would never want to try to compare myself to somebody who achieved so much in their lifetime to help humanity,” Gruffudd begins in a humble tone. “I think I'm genuinely compassionate, I think we all are. I just had to tap into those elements and try to ramp it up to 100 percent because that's the kind of guy [Wilberforce] was.

“He was just an extraordinary character. … When I read about him, I wondered, ‘wow, how am I going to represent someone as amazing as this person?' ... when you describe him, it seems like he's too good to be true.”

All of the above noted, did Gruffudd, the actor, ever encounter any moments in his life where the odds seemed stacked too high to win, like Wilberforce who inevitably triumphed over legions of naysayers? Are the actor's days of singing for his supper behind him?

“I wouldn't want to compare [Wilberfore's life] to the life of an actor, but as far as persevering, as an actor you start at a young age, you train and then it's all about perseverance and continuing to go to those meetings, auditions and knocking down doors ... It's been a long process,” he continues, “It's been 12 years since I left drama college to get to this stage, and it's a nice feeling to have achieved all that in these ten years.

“So, the perseverance aspect of it, yes. But I think what's interesting is that's perseverance toward self advancement, [acting] is a selfish thing whereas [Wilberforce] was persevering on behalf of these other people – that's what's extraordinary.”

Gruffudd expounds on his personal experience by concluding, “I don't think you ever stop worrying [as an actor], and I hope it's something that I never lose because it keeps driving you forward. I'm sure if you were to ask George Clooney, he would feel the same way. You never want to lose that anxiety and excitement because you never know where it's going to take you next.”