Sarcasm: Emo? I’m not saying it! 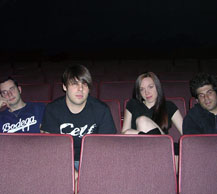 It’s easy to understand why the emo label has been thrown around rather freely when describing Sarcasm. Here’s my theory: It’s a cold, wet night, and Sarcasm is about to play their first show ever. Brad (the lead singer) calls James (the guitarist) and says: "Dude! My brother took the van down to Baja for Cabo Wabo … our equipment was in the van!"

Forced to borrow some pastel-colored equipment consisting of a Rickenbacker, Telecaster and a Squier P-Bass from the "shy kids across the street," Sarcasm takes the stage poised to raise hell, yet fully conscious of the daunting task at hand. Unaware that the borrowed instruments had been tuned to an alarming Weezer-esque precision, the band rips through their set with complete disregard for all that is holy.

Immediately, some guy wearing a Candlebox T-shirt says to his friend: "Hey! These dudes sound just like Jimmy Eat World!" Unfortunately for Sarcasm, an overzealous writer for a local paper covering them that night managed to overhear the guy’s drunken observation.

He proceeded to make a mental note: "Sarcasm – like Jimmy Eat World, except for the girl." That said, Sarcasm’s emo association suddenly becomes understandable.

Though they have yet to set their sights on stardom and the comforts of major label backing, Sarcasm, comprised of Brad Franklin, James Brady, Keri Boyd (bass) and Justin Gershowitz (drums), have caught the attention of many interested media outlets. MTV has licensed all five songs on Sarcasm’s Secrets Are Dirty EP – produced by Steven Haigler (Brand New, Fuel, Quicksand, Local H) – for use on their reality TV shows including "The Osbournes," "The Ashlee Simpson Show," "Newlyweds" and "Trippin’."

"Right now, we aren’t overly concerned with getting signed," admits Franklin. Yet adds, "It doesn’t really matter to us if we sign to a major or an indie. We’re just looking for the right people, at the right label, who will be behind us and support what we do. As of now, we’re having a lot of success where we are. Once the next step presents itself, we will take the leap."

In support of Secrets Are Dirty, Sarcasm has been on the road since June with their U.S. tour scheduled to run through November. The tour included a stint on the Vans Warped Tour, along with opening slots for more popular bands such as Story of the Year, Letter Kills and Taking Back Sunday.

Through it all, Sarcasm has established itself artistically amongst their peers and fans. They’ve gradually built a strong and dedicated fan base and, if the critical praise they’ve attained translates into potential, they’re right where they want to be.

"Our goal is to write and play music that touches and moves the kids that listen to it. If they think it’s emo, great. If they don’t, that’s fine too," Franklin says when asked about the emo label. "I just want them to leave a show or listen to our CD and feel something afterwards."

With blistering guitar riffs and three-part vocal melodies, Sarcasm will be going back to the studio in December to record a new five-song EP. And if the new EP happens to take on an emo feel, you can consider it as important as the label on a Candlebox T-shirt.