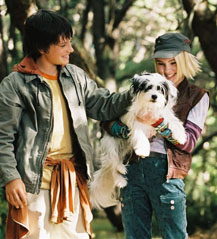 The film of Bridge to Terabithia is so unlike what the trailers and theater standees prepared me for – so much richer and more touching than what looked like a standard enchanted kingdom adventure – that I wish I had discovered Katherine Paterson's Newberry Award-winning novel a long time ago.

There are trolls and magical creatures, but they are the parsley on the plate. The film is a real human story about love and imagination and loss, infinitely superior to most of Hollywood's machine-stamped fantasies for children.

Fifth-grader Jess (Josh Hutcherson) is the middle child in a country house full of girls. His flinty dad (Robert Patrick) is too busy making ends meet at the hardware store to pay much attention to his son.

Jess is creative and a talented artist, but keeps his drawings in a private journal. He hopes to make a name for himself as the fastest boy his age on the playground, so he's crestfallen when he's smoked by newcomer Leslie (AnnaSophia Robb).

Leslie is a bit of an outcast herself. Her parents, successful writers who settled in the country to escape city strife, don't have a TV, and how freaky is that? Leslie reveals herself to be an imaginative writer, and Josh finds her a kindred spirit.

Together they explore the forest behind their houses, turning it into a dreamland where they can vanquish threats that resemble the schoolyard bullies. They construct a treehouse as their castle and act out heroic adventures in their fantasy realm, Terabithia.

The film is directed by Gabor Csupo, a renowned animator (“Rugrats,” “The Wild Thornberrys,” “The Simpsons”) with a keen eye for visual beauty. Surprisingly, and thankfully, he keeps special effects to a minimum as the children's imaginations run wild.

Instead he focuses with restraint and sensitivity on the kids' challenges at school and at home, their boundless creativity, and the way that role-playing transforms their lives. His work with his impressive young actors has an unforced poetry, showing us their forest empire as they see it.

We are drawn so deeply into the tenderly observed friendship between Leslie and Josh that when events take a troubling turn, the impact is powerfully affecting. The book has been the focus of controversy in schools, with some parents arguing that its themes are too adult for impressionable young people.

Bridge to Terabithia is currently in theaters.