By Ernest A. Jasmin 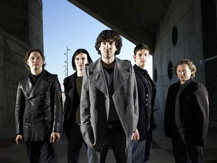 The band may be called Snow Patrol, but drummer Jonny Quinn might be better served by staying away from actual snow for a while.

After all, the guy recently broke his arm while snowboarding and was expected to miss the band's U.S. tour.

“I think for playing drums, it's not the thing to do, because you seem to fall on your hands all the time,” he says.

The good news, though, is that he's returning to the stage ahead of schedule.

Last month, Snow Patrol – the Scottish outfit best known for hits “Run” and “Chasing Cars” – announced that Quinn would have to pull out of their tour. But the drummer says he'd mended well enough to start playing about an hour a day.

“It should be fine for the U.S. tour,” he says, also clarifying the nature of the injury. “It was a bone in the elbow that broke. If you're gonna break something, that's a good thing to break.”

A joke about how his fallback plan could have been to practice until he'd developed skills comparable to Def Leppard's one-armed drummer, Rick Allen, led to revelation of a new tune.

He says his band had recently recorded “Fire Signal” for the forthcoming Spider-Man 3 soundtrack.

“I did a bit of [one-armed drumming] when we were recording ... quite easily,” Quinn says. “But I think I'd need to borrow [Allen's] special developed kit for that sort of thing.”

Regarding the song's sound: “It's not too far from something like ‘It's Beginning to Get to Me.' You know it's a Snow Patrol song, basically.”

Such song placement helped Snow Patrol – which had the best-selling album in England last year with Eyes Open – gain traction on this side of the pond. The band experienced a spike in sales here after “Chasing Cars” was prominently featured in an episode of ABC's “Grey's Anatomy.”

“It seems to be a new way to get your music out there in America,” Quinn says. “It seems to be doing a lot more than MTV, we think, and the radio at the moment. ... 23 million people watched that finale that we were on. You just couldn't get that kind of exposure any other way.”

Quinn says episodes air in Scotland a few months after they do here. But when asked if he was a fan of the show, he says, “‘Grey's Anatomy's' really well-done. I mean it's beautifully shot and has good story lines; lots of people love it. It's quality. Except a lot of us, we hate hospitals and operations.”

Jokingly, he adds “But I'm a fan of them now that they've played ‘Chasing Cars.'”