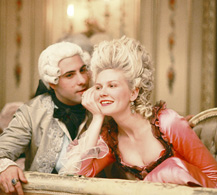 One of the most fun weekend activities in Hollywood is having dinner while seeing a film at Cinespace. On Thursday, Friday and Saturday evenings, the club hosts its “Dinner and Movie” series.

As you partake of trendy cocktails and delectable California cuisine, you can enjoy one of the latest films to have been released or sometimes a silver screen classic. The movie is free and is shown on the venue's huge projection screen in the comfy restaurant/screening area.

This coming weekend will feature the story of France's legendary queen, Marie Antoinette. Written, directed and produced by Sofia Coppola, the film is adapted from Antonia Fraser's book about the ill-fated monarch.

Marie Antoinette follows the icon from her betrothal and marriage to King Louis XVI at the mere age of 15, through her reign as queen at 19, to the fiery fall of Versailles. Portrayed by Kirsten Dunst, we see the naïve Austrian Archduchess enter the scandalous French court and ultimately rebel against the hostile environment she's been thrown into.

Jason Schwartzman as Louis XVI and Marianne Faithfull as the overbearing Marie Teresa, both make stellar turns. But it's really the breathtaking shots of the palace, luxurious costumes and a thoroughly rocking soundtrack that make this film one not to miss.

Come to Cinespace with an empty stomach and ready to enjoy Coppola's thrilling spin on one of history's most fascinating women. May you eat all of the cake you so desire.

Cinespace is located at 6356 Hollywood Blvd. (on the second level) in Hollywood. Film screenings start at 8 p.m. Reservations are strongly suggested. For reservations and more information, call (323) 817-3456 or visit www.cinespace.info.