The Man Hug: Guys Have Warmed to Embraces – in Various Macho Forms 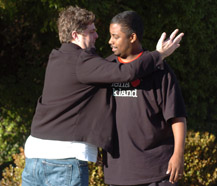 The men of TV's “Entourage” embrace it. The Soprano boys take it in stride.

We're talking about the Man Hug. Dudes hugging dudes; in public and with enthusiasm. It's happening more and more, and not only among celebrity guys.

Hip-hop artists are widely credited with introducing the popular “pound hug” or “pound shake” as a greeting between men. It consists of a combination of a handshake and a stiff one-armed hug, and includes two slaps on the back.

“Depending on the circumstances, it can also include a loud exclamation, a general grunting noise to assert your masculinity,” says Patrick Carone, entertainment director for Stuff magazine, whose readers are largely males in their 20s.

The accepted protocol? Man Hugs are brief, involve minimal body contact and may include a back slap, a guttural noise, or both.

Affectionate behavior “simply isn't a part of the masculine gender role,” says Kory Floyd, an associate professor of communication at Arizona State University who has studied the Man Hug phenomenon. “We socialize men to compete,” he says, “not to be affectionate.”

“It all comes down to fear, unfortunately,” says clinical psychologist Nancy O'Reilly. “Many heterosexual men are fearful of men who are gay, and they're afraid of being perceived as gay themselves. They're thinking, ‘If I really like this guy and want to hug him, is it possible I'm gay?'“

Those thoughts go out the window when men celebrate sports accomplishments, say O'Reilly and others. What's more manly, after all, than belting a grand slam or sacking the quarterback? Or acknowledging such feats with a Man Hug?

Today, American men are taking hugs beyond the playing field, thanks to hip-hop, global communication and guys such as Tony Soprano and Ari Gold of “Entourage.” Elaborate handshakes have morphed into half-hugs and full embraces.

Gold and the guys of HBO's “Entourage” regularly “hug it out” as a gesture of friendship and forgiveness, and their behavior has caught on, says Carone.

“These are the cool guys who rule Hollywood,” he says. “They have the coolest clothes, the fastest cars, the beautiful women. They're comfortable doing it, so it makes regular guys more apt to think it's OK.”