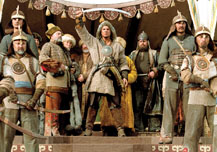 The timeless tale of love and war has been told time and time again. Whether it was in English, silent or subtitled, the viewer can grab a hold to the passion of the story and understand the significance of the battle to the people and the culture that it affected.

The story of Nomad takes place in Kazakhstan during the 18th Century. Kuno Becker stars as Mansur, with Jay Hernandez as Erali and Jason Scott Lee as his teacher. Sergei Bodrov takes over the director's chair from Ivan Passer. The script comes from Rustam Ibragimbekov.

We follow the story of a master and his student, and then the story opens to introduce our hero's best friend and their bond. But then they introduce a girl.

Both friends fall for her, and we're supposed to feel their pain in having to decide who ends up with her. And then , there's the brooding force of the Jungars that are set to attack their peaceful village.

There are way too many plot lines flying around, and not enough time given to any for development. This is an amazing story that deserves to be told, but the writer and director need to pick one story line and then establish secondary plots to follow.

A movie with each plot being treated as heavy as the next doesn't allow the viewer to establish a relationship with the characters in the small time that they have. This movie tells a very weak story of a historic battle and leaves the viewer empty when all is said and done.

The viewer never gets the chance to care about what these characters are fighting for or who they are. At one point the movie takes a turn to try and build up an emotional point, and falls flat on its face. At no point does this movie bring us into the world it is trying to embrace.

The only saving grace is the costumes and sets. Filmed on location and masterfully put together, the film makes you feel like you're looking back in time, but the subtitles make haste of that by mixing slang and old world dialogue into one.

“Are you OK? What has happened to my liege?”

“Bad news, they are going to attack.”