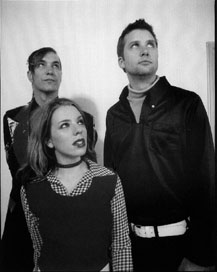 If you want something done right, then do it your damn self! This seems to be the DIY or "do-it-yourself" mentality that Cooper, lead singer and bassist of L.A.-based band BANG sugar BANG, decided to take to heart. After tiring of playing gigs with bands who weren’t on the same musical page, Cooper decided to form the Kiss or Kill Club, a collective of like-minded artists, musicians and dedicated fans (whom Cooper has deemed "The Punters") who come together each week at Zen Sushi in Silver Lake.

The idea behind Kiss or Kill is that there is strength is numbers, with more that 25 bands now a part of this DIY collective. And what was first a monthly event with a few bands and even fewer fans, the shows have steadily grown in popularity over the past year. Cooper is still responsible for booking the bands, yet unlike most bookings which are made from bands sending in their demos, Cooper books shows by going to see bands that she feels will fit into the Kiss or Kill lineup. The most vital way for a band to become a part of Kiss or Kill is its members’ willingness to support the other bands already involved in the collective.

"It’s a way for the bands to create so much more. Everyone has a chance to play a cool night and gain a lot of new friends and fans. There is a communal vibe within Kiss or Kill," Cooper says.

"No one can go further unless you spread the music everywhere," says Cooper. And spreading they are, with the tour consisting of stops everywhere from Missouri to Arkansas.

The tour was a long way from the beginning days of BANG Sugar BANG when Cooper couldn’t even play an instrument. Cooper and Matt Southwell (vocals and guitar) formed the band in 2001 after Southwell challenged Cooper to learn to play bass.

"Matt said that if I could learn to play bass, he’d join me to form a band," she says with a laugh. Cooper learned quickly, and Pawley Filth (drums), a friend of Southwell’s, then showed up on Southwell’s doorstep soon after. As simple as that, BANG Sugar BANG was born.

As for The Dollyrots – BANG Sugar BANG’s partner in crime on the Kiss or Kill tour – the band is a punk trip consisting of Kelly Ogden on bass and lead vocals, Luis Cabeza on guitar and backup vocals, and Josh Valenti on drums.

"Los Angeles is a great place to be a band. It’s an exciting time to be in Los Angeles and be a musician," says Cooper.

However, being a band in Los Angeles isn’t always sunshine and flowers, according to Cooper. "Being in a band, it’s hard. [But] we’re all psychotic enough to keep doing it."

As for the future of both bands, The Dollyrots have signed to Panic Button, with their album Eat My Heart Out released nationwide on Sept. 28. Meanwhile, BANG Sugar BANG is finishing their second album, Thwak Thwak Go Crazy!!

The Dollyrots and BANG Sugar BANG recently played a homecoming show at Zen Sushi with The Waking Hours, The Underwater City People and King Cheetah. Look for a new Kiss or Kill compilation album to be released in January 2005.

The Kiss or Kill Club is held in the Red Room of Zen Sushi every Tuesday night starting at 9 p.m. Zen Sushi is located at 2609 Hyperion Blvd. in Los Angeles, (323) 665-2929; cross street Griffith Park Boulevard. For more information, check out www.kissorkillclub.com. For more information on The Dollyrots and BANG Sugar BANG, visit www.dollyrots.com and www.bangsugarbang.com.