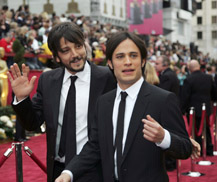 Even before the first statue was presented at this year's Academy Awards, Mexicans had a lump of pride in their throats as three movies directed by their countrymen enjoyed a record 16 nominations, including seven for best-picture nominee Babel . The three amigos, as the directors have been dubbed, are hotter than habaneros from the Yucatan peninsula.

Guillermo del Toro ( Pan's Labyrinth ), Alfonso Cuarón ( Children of Men ) and Alejandro González Iñárritu ( Babel ) are part of a new wave of Mexican auteurs that have crossed the border and triumphed in Hollywood.

The sudden interest in all things Mexico isn't limited to the Mexican-directed films sizzling their way alongside tamer American fare. It also includes Mexico-themed movies such as Mel Gibson's Mayan epic Apocalypto and the rise of youthful stars including Gael García Bernal and Diego Luna. Eleven other Mexicans were nominated for an Oscar in categories from music to makeup.

But like immigrant groups before them who have transformed the American landscape, the exodus of cinema artists to the United States and elsewhere has hurt a Mexican film industry already struggling with limited government funding and the growing dominance of Hollywood fare, some artists here say.

Cuarón, jokingly, has called himself and his colleagues “braceros de lujo,” or high-priced foreign laborers. Like the millions of immigrants before them, they have left a void back home that is difficult to fill.

“Obviously, it's a victory for them as artists,” says Diana Bracho, a top Mexican actress who until recently ran the Ariel Awards, the country's equivalent to the Oscars. “It's important for the Mexican cinema, because it shows the talent that we have in Mexico to make movies.

“The greatest triumph is that these three [directors] remain 100 percent Mexican; they have not lost a thing, even though they make movies in other countries,” says Bracho.

Marina Stavenhagen, the new director of the Mexican Cinema Institute, agrees that Hollywood's gain is not necessarily Mexico's loss.

“I don't feel that we have been abandoned by them,” says Stavenhagen. “These are people who continue to be linked to the Mexican cinema and with a lot of interest in working in this country. They come and give classes here, and with their added visibility they help us in the short term and medium term.”

At the same time, the success of Mexican artists on the international stage is a sign both of their talent and the desperate lack of opportunities back home. In that way, they are not unlike the millions of legal and illegal Mexican workers who sent a record $23 billion home last year.

Like other immigrant groups, the Mexican artists have supported one another in their foreign endeavors.

Some back in Mexico, like Bracho, believe the tight-knit group now in foreign lands will eventually find its way back home in the form of some joint project to help Mexico's struggling movie industry.

The Mexican movie industry faces the same hurdles as movie industries in other countries: the dominance of Hollywood because of the sheer quantity of films it produces and its control of the distribution process.

Part of the problem with the industry is structural. For decades, it has depended on the government for funding and permission.

In some administrations, that allowed many movies to be made, albeit with some level of censorship. But in other times, the money dried up and there was no private movie industry to turn to.

Mexico hasn't seen a big hit domestically since The Crime of Father Amaro , which was released in 2002 and set records for Mexican ticket sales at 5.2 million.

Before 2002, Mexico produced critically acclaimed movies including Cuarón's 2001 film Y tu Mamá También ” and González Iñárritu's 2000 release Amores Perros . Mexico had not produced a best-foreign-film nominee since The Crime of Father Amaro until Pan's Labyrinth earned a nod in that category this year.

“The saddest thing is that there is not more support for all these talented young people coming out of film schools in Mexico,” says Bracho. There are some very good Mexican movies, she says, but they have limited budgets and limited commercial success.

Chris Vognar in Dallas contributed to this story.