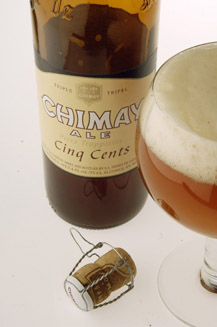 It may just be time for a post-graduate course: “The Sheer Joy and Appreciation of Belgian Ales.”

Why Belgium? Inexplicably, this small country, fractured by language and all too often overlooked and underestimated, has elevated beer-making to an art.

Who else would brew with wild yeast captured from the air? And do it so consistently that they can bottle the resulting ale and sell it commercially?

The Belgians' alchemy with yeasts, hops, malted barley, spices, Curacao orange peel and a variety of other ingredients and flavorings one wouldn't normally associate with ales has long set their wares apart. In recent years, some American brewers, such as Sam Calagione of Delaware's Dogfish Head Brewery, have gone beyond the Belgians in sheer creativity. But it's not likely any of them could have done it without first having savored some of Belgium's finest.

Belgium produces a wide spectrum of beers, but this column will focus mainly on the pale, golden and abbey ale varieties. These might have a very different mouth feel from what you are used to, with heady aromas and complex flavors suggesting plums, figs and exotic spices.

Luckily for us, an ample selection is available locally. Here are a few recommendations likely to be found at retailers with extensive beer selections.

De Koninck, an Antwerp ale that was my beer epiphany. I enjoyed drinking beer but never went out of my way for it until I had De Koninck (Flemish for “the king”) early in a two-month stay in Brussels.

I tried a different Belgian ale on every subsequent night, but De Koninck remains among my favorites. Enjoy the roasty maltiness and notes of caramel in this nicely balanced, copper-hued pale ale.

Maredsous 8, brewed by the makers of Duvel, which licensed the brand from the Benedictines. It's a dobbel, or double, ale; Belgian brewers also make a tripel.

Both terms refer to the amount of malt used, sometimes corresponding with higher alcohol content. This dark, smooth, drinkable ale is richly flavored with notes of fruit and molasses.

Duvel, originally a dark ale, was lightened up by the Moortgat family in response to rising demand for light-colored lagers in the 1970s, according to British beer authority Roger Protz. It's a blended beer that goes through three fermentations, resulting in a flavorful ale with lashings of foam, almost whipped-egg-white thick.

Chimay is probably the widest known of Belgian Trappist ales. You can't go wrong in search of either good taste or a soulful experience with Chimay Blue (a dark ale, labeled “Grande Reserve”), Red (a dark-brown dobbel) or White (a crisp and bitter golden ale labeled “Cinq Cents”).

There's no one Trappist style, and each brand offers a different aromatic and flavor experience – “some products even possess a soul,” insists Chimay's Web site.

Scaldis, like De Koninck, is produced at a family-owned brewery. This amber-colored, complex ale has a clean finish with notes of hazelnut.

While some suggest consuming it at room temperature, Scaldis is equally amazing warm or cold – just not too cold. At $4 for an 8-ounce bottle, it's one of the more expensive Belgian imports – but worth it.