St. Patrick's Day Pub Crawl: A Sampling of Irish (and a few non-Irish) Pubs in L.A. 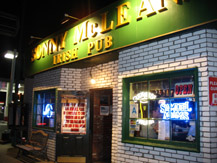 According to Cliff Wright, a regular at Finn McCool's, there are no real Irish pubs in L.A. – just faux ones. He finds this especially surprising because of L.A.'s large ex-patriot community.

Following his definition, a “real” pub pays special attention to the way beer is stored and poured. Different beers should be kept at different temperatures, and the keg should be close to the tap. The longer the line the more the beer is exposed to air, which causes it to lose its flavor.

Wright, an obvious beer connoisseur has yet to meet his pub match. (He says Daily Pint in Santa Monica comes close.) He frequents Finn's because of its proximity to his home, and the two dishes he likes to occasionally eat, the fish & chips and the Irish breakfast.

Wright also appreciates the authentic atmosphere at McCool's. In 2002, owner Geraldine Gilliland wanted to recreate her father's bar in Ireland, so she purchased one at an auction and shipped it across the sea. It opened just in time for St. Patrick's Day that year.

This year, McCool's will be opening at 9 a.m. on March 17 with traditional Irish music and dancing, a Belfast fiddler and a live broadcast on Indie 103.1.

Craziest St. Patrick's Day Sighting: When I ask bartender Eugene what's the craziest thing he's ever seen on St. Patty's Day, he answers in a thick brogue: “Just 4 to 5 hour lines of people waiting to get in.”

“But really crazy,” I insist.

“Aside from drunken idiots?” he shoots back.

After the sharp shot of Irish reality from Mr. Wright, my pub crawl partner and I venture down Main Street to O'Brien's. Kevin, another bartender sporting a thick brogue, isn't quite as friendly as Eugene, a.k.a. “The Winker.”

But Kevin's attitude spurs my friend on to test her skills as the fastest Irish carbomb chugging champ. (A carbomb is a shot of Bailey's and a shot of whiskey together in a shot glass dropped into a pint of Guinness. The drink must be consumed before the cream curdles.)

“I'll do it,” she belts when Kevin tells us the drink is very popular among patrons. (FYI: The Irish carbomb is not ordered in Ireland. In fact, natives find it offensive.)

My friend has defeated more than 75 competitors in her lifetime, and after chugging a carbomb in what seemed like under 2 seconds, Kevin proclaims, “You are the champion! I've never seen anyone drink one faster.”

Craziest St. Patrick's Day Sighting: When I ask Kevin about his craziest St. Patty's sighting, he snaps, “Have you never been to a pub on St. Patty's Day?” Then he relents and shares, “Shit-faced people streaking. Usually girls flashing their chests.”

Though not an Irish Pub, LIBRARY ALE HOUSE (2911 Main Street, Santa Monica) sits smack dab in between McCool's and O'Brien's and seems to attract a hipper crowd. They have 26 beers on tap. The manager tells us they will be cracking open seven Guinness kegs on March 17, instead of the usually one per day.

Packed most every evening, McLean's sells 20 beers on tap and hosts Trivia Night every Tuesday from 8 p.m. to 10 p.m. There's an entire room dedicated to sports, namely pool, darts and two golf video games, which Irish bartender Patrick says get a lot of play.

By the time we park ourselves on bar stools at McLean's, my friend needs something to soothe her stomach from the wreckage caused by the carbomb. Crunchy, well-done fries do just the trick.

A woman sitting next to us leans in and suggests we try a hamburger, too. “It's fat and juicy,” she reveals. “I come here once a week at lunch.”

Though depressing on an average Wednesday night around 10 p.m., everything livens up during Happy Hour, between 4 to 7 p.m. each day. Like McLean's, Casey's hosts a Team Trivia Night on Wednesdays at 6 p.m.

In honor of the holiday, Casey's will drive a double-decker bus during the Los Angeles St. Patrick's Day Parade on March 16, which begins at 11:30 a.m. at Main and Arcadia Streets.

Now we're on to something. These two pubs are where the Irish are at.

Cuddling couples and scores of regulars sprinkle the scene at Molly Malone's. I even spotted some cool folks and a camera crew filming outside. Must be a happening hangout.

For my last stop, I pop into America's No. 1 – and oldest – Irish establishment, Tom Bergin's. Their “Horse Shoe Bar” was the inspiration for the TV show “Cheers.”

Lining the walls are sports and Irish memorabilia and shamrocks labeled with faithful customers' names. The music is loud and the people are louder, often banging the tables with their fists to familiar tunes. A big attraction at Bergin's is their menu, overseen by award winning chef Said Lopez.

This week I learned some very interesting tidbits about Irish pubs: 1) Guinness is the No.1 beer; 2) Irish people don't drink Irish carbombs; and 3) girls take their tops off when they get drunk. Cheers!