Truth Is Everyone Lies: Professor Delves into the World of Deception 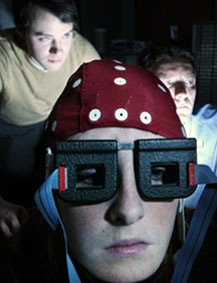 Pride yourself on being an honest person? Well, Julian Keenan would like you to try not to lie for a month.

"Try telling a cop who pulls you over what you really think or a hostess what you think of her food," said Keenan, a Montclair State University professor. "You’ll see how difficult it is and how much a part of your life lying is."

According to Keenan, who has been researching the world of deception for 10 years, everybody lies.

"The average person tells at least one lie per day," said Keenan, who admits he is not the greatest at spotting fibbers.

What surprised him the most in his studies of hundreds of Montclair State students is how prevalent lying is, how bad people are at detecting it and how different the genders are at lying.

Women, for example, tend to lie about their age, weight and looks – makeup, plastic surgery, clothes that enhance or manipulate the body.

"Men exaggerate how much they make and their job title or grade point average," said Keenan, 34. "They tend to lie about wanting to get married and saying they want to have children."

But why lie at all? There are some good reasons that probably go back 5 million years, said Keenan, director of the university’s Cognitive Neuroimaging Laboratory.

"Lying has played a key role in our evolution, in making humans, human," he said. "It’s one of the most amazing, sophisticated, advanced cognitive abilities we have. All evidence indicates that we are genetically programmed to lie. The liar has such an advantage over you. So the gene is passed on."

Keenan points to the recent presidential election. "The party that lied better had an advantage and won," he said.

It is a lesson learned early. About 95 percent of children lie, Keenan said, and they start the practice early – at the tender age of 2.

"We find it is a sign in children of high intelligence," he said. "They have to be able to understand that you have thoughts. They need to hide the cookie from you, not themselves. Very few animals lie, except maybe a few apes. It’s one of the hallmarks of humans."

It could also be why we find pets so endearing. But Keenan’s studies involve humans, his decade-long research done with student surveys, videotapes and audiotapes. His findings have been published in top scientific journals.

Keenan, who has lectured internationally, included his studies on deception in a book published last year called The Face in the Mirror: The Search for the Origins of Consciousness. Co-authored by Keenan, Dean Falk and Gordon Gallup, it explores why some species develop self-awareness and others do not, and when and how we become aware of our presence and thoughts.

Keenan, an associate professor of psychology who trained at Harvard Medical School in neuroscience, is easy to talk to, energetic and enthusiastic.

"He’s an excellent mentor who really stands out at Montclair in his dedication to his students and his excitement about what he’s doing. He loves his work," said Amanda Johnson of Bloomingdale, N.J., a second-year graduate student who has worked with Keenan since she was an undergraduate.

That research has revealed another gender difference that appears early in childhood. Little girls learn what Keenan calls "spare your feelings lies."

"Little girls do it better than little boys, who tend to say what they think," he said.

Of course, some people are better at the game than others, regardless of age. What makes a good liar is the ability to read the other person’s mind. Con artists are terrific at it.

And what, did he find, do the sexes want to hear?

"Men like to hear that they’re funny and smart," Keenan said. "Women want to hear that a man makes good money and wants to get married and have kids." Another attribute of the good liar is being self-aware.

"People who are aware of their own thoughts and are introspective are actually better at reading you," Keenan said. And, the longer you are in a relationship, the better you are at telling if your spouse is lying, he said.

But hey, aren’t we hearing a lot about moral values these days? Doesn’t lying come under that heading?

Advantage or not, lying ultimately carries a big price tag: loss of credibility.

"The worst thing that can happen to you in this society is to be labeled a liar. You can’t have a society based on lies," said Keenan. "We also all have an innate feeling of fairness. And lying isn’t playing fair."

He points to the recent flip-flop tag that dogged Sen. John Kerry, D-Mass., and how difficult it was for the presidential hopeful to shed it.

Currently, Keenan is conducting research with an electrode cap that is put on a student’s head to register brain waves. Polygraph tests are mainly physiological, he said, and register heart rate, sweating, etc.

"We would like to come up with a neuro-polygraph test," he said. "By monitoring brain activity, we’re trying to see if the brain is doing certain things while someone is lying. I’m trying to find the area of the brain responsible for deception."

What led Keenan down this avenue of research in deception? For starters, he’s a psychologist interested in how the mind works.

"[Deception] is such a complex process and plays such an important role in all our lives," he said. "It’s one of the most amazing things that we do, the most advantageous, but it’s mental gymnastics. You have to do all these mental flips."

Students agree. "The research about deception is very interesting," said Kevin Guise, a senior psychology major from North Arlington, N.J., "because of the obvious advantage to it."

Keenan assumed most people were better at detecting lies but found that only under certain circumstances did people become good lie-detectors.

"For example, when a woman is getting hit on, the radar goes up," Keenan said. "Other researchers have found that most professions, even cops, aren’t that good at it, except the Secret Service."

Keenan, who is married, would like to help people "be better daters." He would also like them to know how to protect themselves from deception.

"Women should know what men lie about and so [should] men, who don’t know anywhere near the extent that women do how the opposite sex lies," Keenan said. "You’re much better off when you’re able to detect a lie, much more in control."