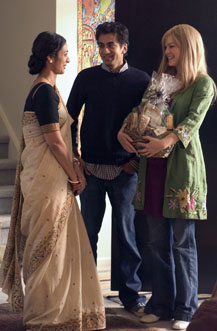 Feelings of loss, hope, and disconnect accompany migration. The inevitable variance, especially between parents who were raised in one country and children who are born into another, represents a universal conflict; one that inspired the pages of Jhumpa Lahiri's bestselling novel, The Namesake , and ultimately, compelled one of India's most famous filmmakers to cultivate a wondrous adaptation.

“I felt very much that I was born to make it,” says director Mira Nair ( Vanity Fair , Monsoon Wedding ). Having read the book in the aftermath of her mother-in-law's sudden death, Nair instantly related to The Namesake's portrayal of displacement.

“I know that I came to making The Namesake because of experiencing death and experiencing loss and the finality of that loss for the first time,” she says. “I know that's what propelled me to make this film and also what actualizes the melancholy in this film, because it came from life.”

At the center of The Namesake is Gogol Kal – portrayed by Kal Penn ( Epic Movie , “24”) – the American-born son of Indian parents, Ashoke (Irrfan Khan) and Ashima Ganguli (Tabu). It is Gogol's name that marks the point of the film's contention. In the earlier stages of Gogol's life, the name represents a source of ambivalence towards, not only his parents, but also his Indian identity.

“The interesting thing about the Ganguli family is that they have the parents who are very much in between worlds and then Gogol who burns to be American, not Indian American but full-on American,” says Nair.

Aside from knowing that his odd name stems from his father's love of the works by the 19th century Russian author Nikolai Gogol, he blames his parents for naming him after a man known as reclusive, depressed and possibly homosexual. His frustration with the name, which brings him unneeded attention from others, leads Gogol to change his name to the more acceptable and less conspicuous Nikolai.

It seems that Gogol could care less about his parent's thoughtful regard for his name. It appears to his parents that their Indian son has traded in central values of family and culture for a purely individualistic American lifestyle. Gogol thinks he knows exactly how he wants to live his life; until, that is, he loses the man that gave him his name.

The devastating death of his father triggers, for Gogol, a reinvention of his own perspectives and identity. His relationship with his family, his friends and with his self evolve under his changed interpretations of culture as he is forced to re-examine his responsibilities within his world.

Culture certainly represents the lens by which Nair records the rich narratives inherent in all her cinematic endeavors. Through films such as Salaam Bombay! , Mississippi Masala and Monsoon Wedding , she has remarkably transferred many stories of Indian life and journeys onto a broader cinematic canvas. She credits her success in storytelling to her focused approach in conveying commonality.

“Without specificity and truth there is no resonance,” she says. “The funny thing is that when you make something more specific and more local, it becomes that much more universal.”

For Nair's next project, she will continue to explore India through world cinema. Johnny Depp requested her to direct him in the film adaptation of Shantaram , which centers on an Australian convict who becomes entangled in the depths of India's mafias.

Until then, with the release of The Namesake in both India and the United States, Nair looks forward to the emotional impact that her latest project will have on a worldwide audience.

The Namesake is currently in select theaters.