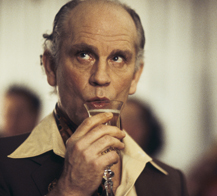 Color Me Kubrick is a “true-ish” tale based on the life of Alan Conway (John Malkovich), the man who managed to scam a boatload of strangers who crossed his path into believing that he was the seldom-seen, super reclusive director Stanley Kubrick. Despite his lack of knowledge about the director's body of work, Conway seems to possess the uncanny ability to zero in on the plaintive cries of the British sucker and coerce them into doing his bidding.

When he's not busy constructing a web of untruths to divest wannabe fashion designers and working-class, heavy metal meatheads from their wallets, he's hoodwinking has-been thespians out of their loot and remaining credibility. But as the old adage goes, one can't fool all people all the time, so you just know a comeuppance is offing.

Directed by Brian Cook, Color Me is one of those stories that, if left in the hands of the unprepared, could easily unravel into a big ball of nothing. Malkovich's turn is one part Being John Malkovich and one part In the Line of Fire : The viewer knows where he's going with whatever situation Conway is canoodling himself into and how he's going to do, but the burning enigma is, how, exactly, is he going to pull it off without getting pinched?

Whether it's the use of over-the-top Americanisms/speech patterns or how he wears a scarf around the neck just so, Malkovich's character becomes plausible and pulls the audience along as he takes advantage of “the unwashed, unloved, unwanted and unknown,” while simultaneously waiting for the other shoe that's inevitably going to fall at some point.

The plot of Color Me becomes clear about five minutes in, so none of the above is a spoiler.

The only special effects to be found are in the myriad of ways Malkovich slowly peels back the layers on his character, eventually revealing the seamier side of seeking one's 15 minutes of fame while poking fun at his real-life persona as an actor and how the dream of being connected to the Hollywood scene might play across the pond with a sprinkle of the British TV show “Upstairs, Downstairs” thrown in to taste.

If you're in the mood for a caper movie, then Color Me Kubrick isn't it, but it's still quite a ride.