Extra, Extra: Glimpse into Movie-Making Not so Glamorous 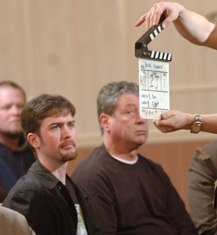 The guy with the machete was my first clue.

Then there was the zombie with glasses and peeling makeup. And the hours it took to line up all the camera angles, the countless retakes and the assistant director who couldn't remember my name.

Moviemaking: Up close, it's not so glamorous.

I made my film acting debut recently alongside about 75 fellow would-be movie stars to be unnamed, uncredited and unpaid extras in independent filmmaker Stevan Mena's Brutal Massacre , a mock documentary about making a horror movie.

We cheered. We booed. Mostly, we sat around for 10 hours as Mena and his crew arranged lights, cameras and actors for a scene that will last less than 10 minutes.

“If there's anything you will be surprised by, it's how long everything takes,” David Naughton, the movie's star, had warned me. “Have something to read.”

Naughton ( An American Werewolf in London ) leads a Brutal Massacre cast studded with stars of other classic horror movies, ranging from The Texas Chain Saw Massacre to The Evil Dead .

Other stars include Brian O'Halloran (“Dante” from Clerks ), Gerry Bednob ( The 40-Year-Old Virgin ) and dozens of folks who – like me – volunteered for crowd scenes.

On this day Mena needed us, the crowd, to portray horror movie geeks at a convention featuring Naughton's character, a struggling horror director.

The day before the shoot, I asked Mena for advice.

“No scene stealing!” he warned. Mugging for the camera, waving my arms and generally overacting would get me cut out of the movie.

Wearing my most horror-geek-like outfit – black overcoat, jeans, T-shirt that said “Chicks dig scrawny pale guys” – I stumbled into the location around 7:45 a.m.

Immediately, fellow extra Aaron Snyder whipped out his machete. He became a whole different kind of scary when he showed me it had been signed by every actor who's played the hockey-mask-wearing killer “Jason.”

Then came Christopher Jenner: tattoos snaking down his arms; a metal stud sticking out of his chin; and fluorescent yellow hair with red spikes.

The outfit was “just a little bit toned down” from what he'd planned, Jenner says. “When this came around, I was like, ‘Most definitely!'” added the near-obsessive horror fan, exuding an eight-pots-of-coffee intensity.

Jenner, who runs a nearby pizza shop, donated dozens of pizzas to feed us extras. Mena thanked Jenner and others who helped out by giving them roles in the scene.

The crew made sure I also got a T-shirt from one of Naughton's character's fake films (“From the ... director of Fish Who Ate Flesh : PEOPLE PESTICIDE”), and Mena stuck me in a can't-miss spot near bespectacled zombie Bill Lessig.

Lessig seemed downright sedate compared to Jenner, but the homemade zombie getup was elaborate enough to win Lessig a speaking role. On camera, he got to ask a question of horror director Mick Garris, who makes a cameo appearance in Mena's movie.

My biggest break was when Sean Tiedeman of Allentown, Pa.'s K Studios gave me a part in a featurette for the Brutal Massacre DVD.

The featurette expands on the movie's stories and characters, so Tiedeman and I decided it should reveal a twist for my character, too. While I appear to be just a nervous horror fan, it turns out my character's actually a clueless reporter trying to act like a horror fan. (Why play against type?)

After six hours of shooting, though, the excitement started wearing off. Lines that had been hilarious the first eight times seemed less funny with each retake. I counted at least six extras who nodded off.

But Mena insists he didn't notice our energy plummeting and says we were “fantastic” up to our 6 p.m. dismissal.

So, what about me? Do I have a future as an extra?

“I can't really judge your performance,” Mena says, “but it's really a question of what kind of stamina you have for sitting around doing nothing all day.”