OTEP: Makes The Ascension Will the World Rise With Them? 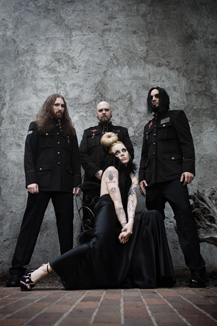 There are many bands involved in movements to make the planet a better place, and not just through soothing the savage beast with their music. Among the most obviously socially conscious is OTEP, the Los Angeles-based heavy rock quartet fronted by their namesake, Otep Shamaya (OTEP = the band, Otep = Ms. Shamaya).

The band is currently involved in a fund-raiser for Darfur, the war-ravaged area of Sudan, and a long-running band project is the You Are Not Alone organization, a support network for those suffering from notions of suicide or any other manner of depression.

So, it's really not surprising that OTEP chose to record their new album in New Orleans, a process that Otep says helped to charge-up the group spiritually.

“We were somewhat affected by the devastation and the neglect and the despair that exists in New Orleans and that led to a sense of a need to act, be proactive reactionaries. But the spirit of New Orleans, how much the people love the city and what the citizens are doing themselves to rebuild and have a resurgence of their own culture is really amazing. It put a lot of things in perspective for us,” she remarks.

The new OTEP album, released through Capitol Records, is very appropriately titled The Ascension . Lyrically, The Ascension takes a look at civilization and doesn't like what it sees: a planet in a world of hurt.

Otep's words don't cut anyone any slack either; on “March of the Martyrs,” she repeatedly sings, “I will suffer so you don't!” But after the song ends, she whispers forcefully, “Don't be psyched!”

The following song, “Confrontation” has the real message: “Stand up, speak out, strike back!” It's loud, heavy and pummeling, and more encouraging than preachy. Through the noise a message comes through clearly: Get off your ass and do something!

OTEP has sort of eased its fans into interaction by offering some fun things, like helping to schedule the band's tour stops through Eventful Demand and participating in a sing-along contest for The Ascension's first single, “Ghostflowers.”

“It's very important to me to interact with the fans and keep them involved,” Otep says. “It's how I'm able to keep a pulse on what's important in their lives and understand how to connect with people. Even though I don't get to know them personally, I can still grab a bit of the essence of that energy, of that culture, of that counter-culture that we're trying to ignite.”

OTEP caught its major break back in 2001 when, without even a demo tape, they were invited to play on one of the main stages of Ozzfest. In that sense, they sort of roared out of nowhere in a similar way that Nirvana had a decade earlier. Otep points to Kurt Cobain and company as more than just an influence, more like lifeblood.

The band pays homage to Nirvana on The Ascension with a scorching cover of “Breed,” a song that will probably forever resonate with Otep.

“We'd never done a cover song before but I just love the song. I listen to music before we play on tour and that song just kind of grabbed me. I couldn't get enough of it. I'd listen to it 60, 70 times, just over and over in the back of the bus before the show,” she recalls.

“For me, it's just this amazing song that touched me in a certain way that made me miss Nirvana a lot and Kurt Cobain's touch on musical culture and his philosophy on music and art. I just wanted to do something to inspire and to, in a way, connect our energies.”

Connect with The Ascension on March 20. For more information, visit www.otep.com.