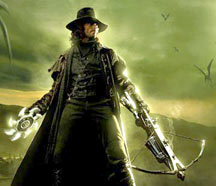 The film, set in late 19th century Transylvania, tracks the legendary exploits of Van Helsing (Hugh Jackman), a rogue monster hunter with no memories of his past. Helsing is sent out by an ancient organization to find and destroy the likes of popular storybook monsters including Mr. Hyde (of "Dr. Jekyll and Mr. Hyde"), Frankenstein and, the villain that will present the biggest challenge of all – Count Dracula (Richard Roxburgh).

When Van Helsing eventually arrives in Transylvania after completing successful missions in Paris and Rome, he’s heavily armed and ready to kill. Little does he realize that Anna (Kate Beckinsale) – the last remaining member of a multi-generation royal family entrusted with ridding the city of the famous Count – is reluctant to let him help. After a wonderfully crafted attack of flying vampires raids the town, her opinion gradually begins to change. This sets up the action for the rest of the film as Van Helsing and Anna unite in their common quest.

The strongest things going for Van Helsing are its chilly production design, breathtaking effects (people’s transformations into vampires and werewolves, among other things) and heavy instrumental score which, at some points, seems to become a character of its own due to its overbearing quality. Jackman and Beckinsale both do competent jobs in their roles, although their characters are far from being fully fleshed out. There’s also a seemingly intriguing back story for Van Helsing that is briefly touched upon but, by the end of the film, is still unfortunately unresolved.

Sommers, who also directed The Mummy films for Universal, does a decent job of weaving in a handful of the studio’s classic monsters into a single film. Just wish that there was less action and more story.