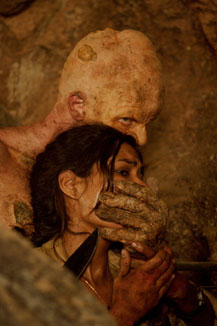 The Hills Have Eyes 2 trailer scares the hell out of me. It features an obscure and creepy song by Devendra Banhart; imagine a folk musician channeling Satan, and you get the idea. The imagery is savage, brutal, intense, engaging and very, very scary. Keep in mind; I'm only talking about the trailer here.

When it comes to horror, no name is more synonymous with the genre than the master himself, Wes Craven. After all, this is the guy who brought us the A Nightmare on Elm Street (1984) franchise, and the Scream (1996) movies, which inspired the Scary Movie (2000) franchise, and on and on.

Craven is simply a master storyteller. Take Music of the Heart (1999) for example. The guy would excel in any film genre.

But let's face it; what we really want from Craven are movies that scare us. By all indications, The Hills Have Eyes 2 delivers thrills, chills and a whole lot of blood spills.

Hills 2 comes on the heels of the wildly successful The Hills Have Eyes (2006), a remake of the classic film Craven wrote and directed in 1977. A real gory, good time.

These movies are brutally violent, but in a way, they have a redemptive quality. A film like the classic Rocky (1976) is violent. Symbolic undertones aside, it basically comes down to these two guys beating on each other.

While that may be disturbing, there is something guttural and satisfying on some level, and you find a primal urge being stirred. Like Rocky , with Hills you root and cheer for the good guys (or bad guys, if you're sick).

The bloodier Hills got – the more skulls that were punctured and blood spurted – the more the people in the theater cheered. This must be what it was like to be in Rome's Coliseum when gladiators hacked each other to pieces, I thought to myself.

It was a true guilty pleasure: this wimpy suburban guy, tormented by these mutant killers, finally becomes a killer himself and gives them the payback they deserve. Quite a contrast to the normal slasher film scenario of the relentless, unstoppable psycho killer (Jason, Michael Myers, Leatherface, Freddy Krueger). In Hills, the good guys at least have a fighting chance.

In this sequel, the savagery continues with desert mutants once again wrecking havoc on their prey. This time the monsters aren't picking on weak suburbanites. They're taking on a truly worthy opponent: the U.S. military.

Craven took a few minutes out of his busy schedule to talk to Campus Circle about the new horror thriller and his screenwriting collaboration with his son, Jonathan.

It is very scary. Breakneck pace, great characters and a military take. It's fun.

The last Hills movie was very gory. Can we expect more of the same?

The characters that make up the film are definitely battered and bloodied along the way. Soon the guns are emptied, and it gets right into hand-to-hand combat.

Craven stops here to point out that the military angle in the story is not meant to be a political statement; although he says he did want to make a contemporary film that focuses on the plight of our soldiers.

What was it like working as a father-son team with Jonathan?

Very gratifying. One month to write a script was very intense. Two people were needed, so I thought, ‘why not call John?' We both collaborated on the outline and took turns writing and swapping scenes.

Although being the son of Wes Craven has got to give Jonathan a leg up in terms of becoming a filmmaker, Craven insists that Jonathan paid his dues before the two became a writing team. He says the younger Craven has already spent a lot of time writing (not to mention also directing, producing and taking on nearly every other imaginable crew position in movies).

Visually, the film looks amazing. What is the mood you are trying to set?

Vastness, isolation, nature dwarfing man. This is why we chose to film in Morocco. The D.P. [Director of Photography] and second unit director really did a good job achieving the look the director and I were after.

Much like those brave men and women, many of these fictional heroes will never make it home. At least with a Wes Craven flick, we're entertained – and no one really gets hurt.

The Hills Have Eyes 2 releases in theaters March 23.