I Think I Love My Wife: (Fox Searchlight) 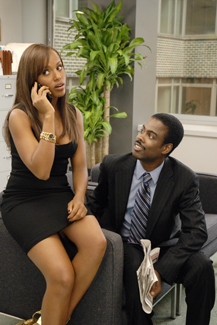 Because of the controversial subject – infidelity – addressed in Chris Rock's latest flick, I Think I Love My Wife , we asked both a man (M) and woman (W) to weigh in on how they liked it. We all know most women are disapproving of a “wandering eye,” while men feel compassion for the guy. Just remember, in the words of the late, great James Brown, “this is a man's world but it would be nothing without a woman to care.”

M: Chris Rock is so funny.

W: Totally. Watching this movie is like watching Rock do his stand-up.

M: I wish the execs let him do more improvisation. I wanted to see him tell off more people. You could tell he was holding back sometimes to stay in character as Richard Cooper.

W: Steve Buscemi is also comical, in a creepy sort of way. He fits his character, George to a tee. He can't help but come off as sleazy. Maybe it's his eyes but he looks like he has extramarital affairs.

M: He can make me laugh with one look.

W: I had problems with Kerry Washington.

M: You're just hating. She was amazing. Those legs. Those lips. That skin. Are we talking about the same Kerry Washington?

M: Now don't blame everything on Nikki. It takes two to tango, as they say. Cooper was BORED. And Nikki was a breath of fresh air. I could relate.

W: But you can't put it all on the woman to keep the sparks flying in a relationship. Maybe Cooper wasn't doing everything he could to keep the fires burning at home. To me, it was just obvious Nikki was needy and searching for a savior, and she found the perfect sucker: Cooper. Even after he got beat up and was put on probation at work, he didn't cut her off completely. Arrrgggh!

M: Hey, like they said in the movie, when two people are attracted to each other, things get out of control.

W: Hmmmph. Well, like they also said in the movie when Cooper was fantasizing about being stag again, when you're single, you're alone!