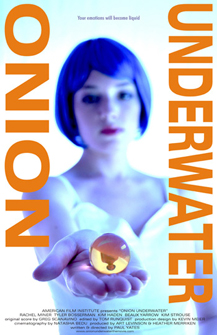 What do directors Ed Zwick ( Blood Diamond , The Last Samurai ), Darren Aronofsky ( The Fountain , Requiem for a Dream ) and Amy Heckerling ( Clueless , Fast Times at Ridgemont High ) have in common? They all graduated from the American Film Institute. This week, the next generation of AFI filmmakers are debuting their Thesis films.

If nothing else, the levels of energy and enthusiasm promised each night will be off the chart. Some of the projects available for viewing are writer/director Adam Goudchaux's The Red Front , a traumatic drama set in 1933's Nazi Germany, and Peter Shanel's Quake , a topic that hits close to him.

Danielle Shamash chronicles the misadventures of a remarkably peculiar man with unusual ideas about who he is in The Sunday Man , and Jenessa Joffe's Shank , an account of a suburban high school freshman who is infatuated with her soccer coach might make you smirk.

Isaac Feder's Sadie & The Slot Machines is set in cinematic Las Vegas, focusing on old lovers, casino lounges and a failed reunion, while Paul Yates' Onion Underwater piques interest with a summary that reads: “Tara, a woman with no memory, awakens to find herself surrounded by three beautiful strangers. They embark on a journey to discover who she is. In a night of sublime ecstasy, they become her best friends, her lovers and ultimately, her executioners.”

This year's showcase will screen a wide-ranging mix of 23 films over four evenings, with an after party immediately following each night. According to AFI, these productions represent AFI Fellows' rich, hands-on experience in narrative visual storytelling.

Who knows? You may witness the debut of the next Scorsese or Spielberg. And one of the best parts about the whole experience is the screenings are free! Just be sure to reserve your seat.

ArcLight Hollywood is located at 6360 West Sunset Boulevard in Los Angeles. Screenings are free to the public, however seating is limited and reservations are necessary. For reservations and more information, call (323) 856-7722 or visit www.afi.com/showcase .