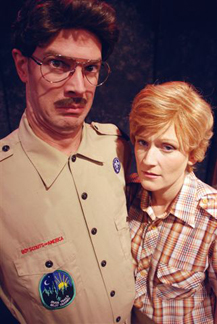 The people at the Groundlings Theatre have completely lost their minds. My friend Missy and I went to see their new month-long series, “When Groundlings Roamed the Earth.” Everything started out as expected. I gave the doorman Brendan a hard time, the house band played and people either a) looked for their seats or b) pretended to be interested in their programs.

“Bathog Works Here” kicked off the night with a bunch of people sitting in a dull meeting. Curly haired actor/writer Hugh Davidson (“Robot Chicken”) showed off the black magic skills he learned in a workshop over the weekend to his colleagues.

Davidson zapped, made two hot chicks gag for air with a point of a finger and had them make his girl-on-girl fantasy come true. My reaction: I froze until I could no longer hold the laughter trying to escape my belly. I was afraid of what else was to come.

“Bathog” was just one of the skits with a magical, way-out-there touch. Another good one was “Inferno's Demise” featuring Davidson, Nat Faxon ( Beerfest ) and Jim Rash.

Davidson was a severely fashion-challenged spirit trapped in hell, and Rash – looking like a rejected Goth doll – was his guide, mercilessly messing with his mind. It was a combination of The Odd Couple meets Dr. Strangelove . Faxon and Rash played partners squabbling over getting ice cream, as Rash tried to fry Davidson. Thank god for intermission, otherwise, the seats would've been moist.

Two other skits I enjoyed were “Stoopified” with Kevin Kirkpatrick and Michaela Watkins, and “Dinner Talk” with Rachel Duguay, Jill Matson and others.

Kirkpatrick was a balding, Bellagio hotel-sized genius in “Stoopified” who tried desperately to get inside Watkins' apartment after a so-so date. The boy would not take no for an answer. Out of nowhere, he busted out a few Van Damme leg kicks to either impress or scare Watkins. I laughed hard and loud.

Rachel Duguay kept me rolling in “Dinner Talk,” as well as in every other skit she was in. She was on a damn good roll.

And this was only the first half of the show. Director Ben Falcone made occasional appearances to solicit a few of the Groundlings members to do 3-minute improv sets, per the audience's suggestion.

The resulting performances were original, bizarre and hella funny. This is the same Groundlings that gave us Cheryl Hines (“Curb Your Enthusiasm”), Lisa Kudrow (“Friends”) and practically everyone on “Saturday Night Live.” Groundlings know how to do funny – magnificently. Make sure to bring tissues.