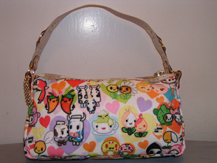 Milk cartons dressed like dairy cows. Cheerful tulips next to a smiling cup of tea. A sweet 'n' sexy mermaid looking upon a sleek, Japanese woman in tall black boots.

These are just a few of the characters that live in the world of tokidoki. LeSportsac, founded in 1974 and known for its parachute nylon handbags has sprouted a popular line with the tokidoki prints.

With designs reminiscent of Japanese comics and animation, also known as manga and anime, tokidoki designs have a whimsical, playful, innocent allure that continues to build a loyal following.

Interestingly enough, the artist behind tokidoki is not from Japan. Hailing from Rome, Italy, artist Simone Legno is nevertheless very attracted to Japanese art and culture.

“Tokidoki means ‘sometimes' in Japanese,” he says. “I chose a Japanese word because I love Japan. I love everything from the ultra modern happy face of Shibuya to the serious, magic silence of Kyoto.

“I chose ‘sometimes' because everyone waits for moments that change one's destiny,” he continues. “By simple chance or by meeting a new person, tokidoki is the hope, the hidden energy that everyone has inside that gives us the strength to face a new day and dream something positive, that something magical will happen to us.”

In 2003, Legno experienced a tokidoki moment when Pooneh Mohajer, the co-founder of cosmetic company Hard Candy, and her husband Ivan Arnold came across Legno's personal Web site. Quickly becoming fans of his art and seeing the potential of bringing his designs to the masses, the couple made Legno an offer that changed his life and breathed new life into LeSportsac.

LeSportsac's attention to detail meshed with tokidoki's lovable designs have made a splash in the fashion world. Celebrities such as Fergie of the Black Eyed Peas and Jessica Alba have been spotted proudly sporting the bags.

Yet despite his success, Legno gives credit to those who affected his destiny and provided the magical moment he calls “tokidoki.”

“They believed that everyone should experience the cute and playful, yet sexy and sophisticated world that is tokidoki,” says Legno, speaking of entrepreneurs Mohajer and Arnold. “Now I'm in Los Angeles living my dream of making the world a bit more colorful and positive through tokidoki!”

tokidoki for LeSportsac is sold at Nordstrom, Urban Outfitters and the LeSportsac store located at the Beverly Center in West Hollywood. Prices range from $42-$210. For more information, visit www.lesportsac.com or www.tokidoki.it.