Close to Home: An American Album: Ongoing Through Jan. 16, 2005 @ The Getty, West Pavillion 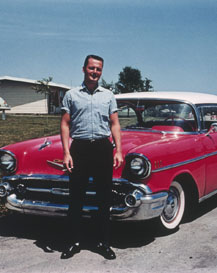 Living in Los Angeles, one often forgets what real people look like. To see a picture of anyone less than an Adonis, the photograph must be ironic.

It is, then, both entirely depressing and wholly refreshing to see snapshots from our collective past in the Getty’s exhibit Close To Home: An American Album. Some of these people are downright unattractive, however, it seems that beauty and realism are indirectly correlated – as one increases, the other decreases.

Standing in front of a photograph of a wretched Beverly Gill hours before her 1961 prom, you witness true unhappiness. Or, if you’re a true masochist, listen to Beverly, now, explain the circumstances behind the frown. With digital pictures constructing reality, snapshots of a pre-celebrity obsessed era seem to be the last vestige of veracity.

Close To Home is divided into three sections. The first is a small room showcasing family photographs of established artists such as Thomas Eakins, Edward Weston and Dorothea Lange. Next is a section devoted to black-and-white family photographs created between the 1930s and 1960s that were separated from their original owners and later found by collector-dealers and writers. Third are photographs, including the one of Beverly Gill, created from color Kodachrome transparencies made between the 1940s and the 1960s.

The black-and-white photographs are subdivided into categories like "pets," "couples" and "women with hats." It is here, under the collection of "couples" photographs where we find my favorite diamond in the jewelry store. In the lower left hand corner is a cross-eyed, goofy looking man sitting on a hammock with his beautiful wife. There’s a smile on his face, a smile that expresses pure dumb-luck joy that sometimes things work out in life.