Hilary Swank: Reaping the Rewards of an Amazing Career 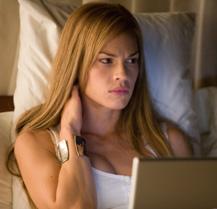 It's not every day you get to chat with a two-time Academy Award winner. By all accounts, Hilary Swank is just as down to earth and approachable in person as she appears in her films.

She's the quintessential girl next door. Success doesn't seem to phase her; and she hasn't forgotten her humble Nebraska roots.

She speaks about things such as mamma, pecan pie and public transportation. Hilary Swank is a people person.

She also has a lot to say about her new film, The Reaping , a supernatural thriller set in the deep South. “I like smart thrillers,” she says.

From the moment she began reading the script, Swank was hooked. “It was a page-turner. I thought it was a truly scary story while also being smart and dramatic, and there are real human moments in this story.”

Swank plays Katherine Winter, a former minister who has lost her faith when her husband and son die while the family is on missionary duty in the Sudan. Swank turns in a very subtle and human performance, while also managing to show a certain vulnerability along the way. Similar to her inspiring performances in Boys Don't Cry (1999) and Million Dollar Baby (2004), Swank once again makes it look all too easy.

In The Reaping , Winter visits a small town in Louisiana that's tormented by what appears to be Biblical plagues, all seeming to stem from an enigmatic little girl named Loren McConnell (AnnaSophia Robb). McConnell has disturbing habits like turning water into blood and sending hordes of locusts after the townspeople.

The townsfolk say they only want McConnell dead so the madness will end; but that excuse just doesn't add up. The story traces the plagues, one by one. The terrors will surely continue mounting until eventually death of the firstborn and fire from heaven will follow.

With all the supernatural overtones in the film, is Swank herself a spiritual person in real life? “Yes,” she assures. “I am spiritual. I believe in a higher power.”

Swank goes on to admit she was not baptized while in Baton Rouge, but was immersed in the culture, food and true Southern hospitality. Swank praises the filmmakers, who persisted in completing the movie, despite the fact that Hurricane Katrina had brought the production to a halt.

“They finished the film, which helped provide jobs and hope to the people of Louisiana,” she points out.

Though the premise behind The Reaping – where people of the cloth lose their faith only to regain it in order to fight the forces of darkness, or at least to acknowledge the power of good over evil – has been visited before in Signs (2002), The Prophecy (1995) and From Dusk Till Dawn (1996), where The Reaping succeeds is in setting a mood.

There are a few good jolts, as provided mostly due to sound effects and quick-cut editing. There is also an ominous feeling throughout, much like The Omen (1976), The Exorcist (1973) and other such films of the genre.

Though not particularly scary, or in any way deserving of its R-rating, director Stephen Hopkins ( The Ghost and the Darkness (1996), 2000's Under Suspicion ), who is also puzzled by the rating, chalks it up to the Biblical overtones, not to mention an overly sensitive MPAA board.

The charming Idris Elba plays Ben, Winter's best friend and partner. A devout Christian, Ben goes along on the journey to strengthen, rather than debunk his faith.

In person, Elba's British accent is quite disarming. You're reminded that it's his American dialect during the film that is the act. (Elba will star in the upcoming horror thriller 28 Weeks Later , the sequel to director Danny Boyle's excellent zombie flick 28 Days Later .)

The supernatural element of The Reaping was intriguing to Elba, who does believe in ghosts; although he found himself much more creeped out by the very real flying locusts used in the film. Elba recoiled, claiming the insects were as big as his cell phone, as Swank laughed at Elba's phobia.

As McConnell, Robb is captivating. The young actress barely turned 12 as production wrapped; but she's already a veteran player in her own right, having played roles in such films as the recent Bridge to Terabithia and Tim Burton's Charlie and the Chocolate Factory (2005).

Robb has very few lines here, but still manages to light up the screen every time the camera focuses on her. Of course, we've all seen the evil child concept presented in movies before, but there's something very different going on in this story. (To say more would give the whole thing away.)

The Reaping delivers as a genuinely entertaining popcorn flick. We should expect no less from producer Joel Silver, who has brought us such blockbuster franchises as The Matrix (1999), Lethal Weapon (1987) and Die Hard (1988) films.

Previously, Silver and Hopkins have teamed up for other projects, including the intense Predator 2 (1990) starring Danny Glover. One might suspect the prolific Silver creates quite a buzz while on set, but Hopkins says Silver never interfered with his directing and was very supportive throughout.

Enjoyable from start to finish, The Reaping holds viewers' interests. In fact, I found myself regretting the massive amount of Diet Coke I consumed during the film. Holding my bladder until the closing credits seemed nearly as daunting as braving the Biblical plagues.

Having slimmed down quite a bit from all the muscle she packed on to play Maggie Fitzgerald in Million Dollar Baby , Swank, although still very fit, appears quite soft and feminine in The Reaping with some surprising and appealing curves. Seeing her run around throughout most of the film in a tank top is what really might keep fans glued to their seats (Laura Croft ain't got nothin' on Swank).

When I told her how terrific she looked, she just smiled and said sincerely, “Thanks! Thanks a lot!” and just kept smiling. What other reaction would you expect from a down-home Nebraska girl?

The Reaping releases in theaters April 6.