Cuba Gooding Jr.: Searches For What Love Is 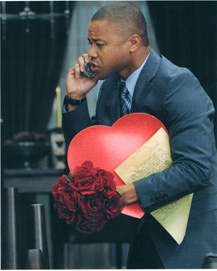 Let's face it; love can downright suck. It can be brutal. It makes you cry, and sometimes you wonder why you wanted to be in it in the first place.

This is exactly what writer/director Mars Callahan's What Love Is strives to convey. “If you leave this movie scratching your head, then I've done my job,” explains Callahan.

His film is a brutally honest story of love's catastrophes. The plot focuses on Tom (Cuba Gooding, Jr.), an unsuspecting boyfriend who comes home to find that he's been dumped by his girl of three years on – can you believe it! – Valentine's Day. His friends are, of course, supportive but predictably have their own two cents to add about the situation.

Tom's married friend and upstairs neighbor Ken (Callahan) lives the life of a man content with his lot in love. He's been married for five years, and his companion is also his best friend. (Who does that anymore?) George's (Sean Astin) friendship offers the dreamer's side of love, and his views are, well, similar to those described in this article's first three sentences.

The most opinionated friend, Sal (Matthew Lillard) almost convinces Tom that all relationships will end and it's better to be single. His passionate, sometimes irrational tirades give us a glimpse of male neurosis – acute homophobia, included – so much so that it leaves no question that someone somewhere down the line hurt him.

“It was a great challenge owning this character, who had such strong opinions and strong convictions on males and females,” Lillard conveys. Of course, that's the mark of a great actor, as Lillard convincingly makes the audience drop their jaws throughout the movie.

While this film centers around Tom and his failing relationship, Sal's conflict with everything to do with love greatly influences the tone of the movie. The story's darling is Wayne (Andrew Daly), flamboyantly gay and here to stay. His ability to stay true to his friend and endure the verbal lashings that Sal hands out, while continuing to be happy about his impending nuptials is simply astounding.

In fact, all of the characters' fast moving dialogues, while a bit far-fetched and brash, mirror the real-life interactions of males and females. They are each easy to identify with in their own twisted way and solicit compassion for their plight.

“It felt very natural to do this movie because the script was inspiring, and the context so outlandish,” Gooding, Jr. points out.

In order to sweep away Tom's sadness, womanizing Sal invites over some ladies. It is Valentine's Day, after all.

Just as frank and unapologetic in the relationship game, the women, led by Laura (Gina Gershon) and Rachel (Anne Heche) are equally unsatisfied. Their tongue-in-cheek perspectives are pretty on the money, albeit a bit bitter about men.

Katherine (Tamala Jones) likes to have her cake and eat it too, preferring to prey only on men that are attached. The female version of George, Amy (Judi Tylor) brings the movie back down to earth with her parting words to Tom, which are simple and from the heart.

That being said, what happens in the end may not answer the title's question, but for better or worse, you'll leave the theater wondering if you'll ever find it.

What Love Is is currently in select theaters.