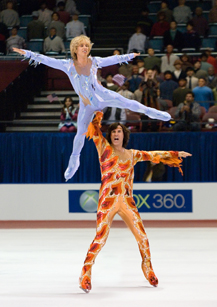 Gosh. Where to start? This movie is really funny. Why wouldn't it be? It stars Will Ferrell as Chazz Michael Michaels, a sex-drug-rock-addicted burly figure skater with Jon Heder as his rival, Jimmy MacElroy, a “15-year-old-looking girl who's not hot,” according to Michael Michaels.

When the two tie for the Gold Medal at the World Championships, they engage in a knockdown brawl in front of the entire stadium (and fans worldwide via TV satellite), displaying the mental maturity levels of 8-year-olds. As a result, the skating commission, led by ice icons such as Peggy Fleming, bans the skaters from competition for life.

For three-and-a-half years, the two are relegated to obscurity, their dreams deferred. Then MacElroy's stalker finds a loophole in the decision. Though the two can't compete in men's singles, they can enter the pairs competition!

And so the two begin a regimented practice schedule, complete with noon-stop skating, walking the treadmill during dinnertime (for Michael Michaels) and jazz dance lessons. They live together in a log cabin in the woods, and basically do everything together.

The more hilarious parts of the movie come, of course, when the two are skating. Though not completely original, comedy about men's balls in other men's faces is hilarious – every time, without fail.

So each time Michael Michaels lifts McElroy, upside down with legs spread eagle or by holding his crotch, fits of laughter erupted from the audience. It's funny because it's awkward. It's funny because their faces reveal exactly what they're feeling.

You just can't help burst into fits of laughter as these two straight men are forced to grab each other, hold each other and dance side by side wearing only unitards and face paint. Riddled with jokes from beginning to end, largely due to Ferrell's physical comedy, this flick kicks ice.