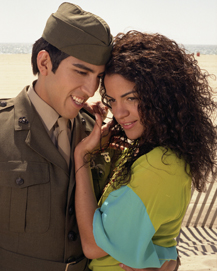 Sometimes when you reach for the American dream, the price you have to pay for it is too high. For the men and women who enlist in the U.S. Army to gain citizenship, only to end up killing men, women and children, the dream becomes a nightmare.

Jesus Feliciano, the lead in G.I. Jesus thought he was doing right by his family – at first. The film follows his change of heart, and in doing so, exposes the plight of thousands of soldiers just like him.

“This is not the first time the U.S. Army has hired foreign nationals to fight an American war and dangled citizenship in front of them,” states Lee Caplin, producer of G.I. Jesus . “They've done it in other wars. The deal was, we'll make you a citizen if you survive two tours of duty and get out honorably.”

G.I. Jesus , winner of the Grand Jury Prize at CineVegas 2006, tackles the topic of foreign nationals fighting the U.S. war in Iraq with courage and candor. After reading a short article in the Los Angeles Times about the army recruiting Mexicans in Tijuana to fight in Iraq in exchange for a green card, Caplin and his partner, Carl Colpaert decided to develop a screenplay.

The film is the latest in a string of successful ventures from the partnership between Caplin, founder of Picture Entertainment and Colpaert, one of Cineville's founders. Past projects include Mrs. Palfrey at the Claremont and Steal Me .

Without big budgets and bigger stars, Caplin, who executive produced Ali , and his cohorts focus on getting respect and the right recognition. “We go to the festivals, we win our awards, and we market our films in that way,” he says with a smile – like a proud parent.