The Art of: Capoeira 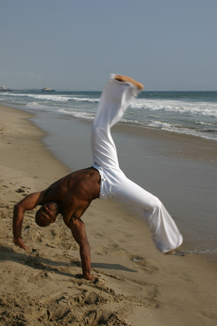 The art form of capoeira is held in such reverence by its practitioners that it's often referred to as a living being unto itself. A vital breathing entity with dreams and aspirations of “her” own.

Those who play the game feel a profound responsibility to honor and protect the practice. Capoeira is alive, the sentiment goes, and as such, requires tremendous care.

It's true that to learn to do capoeira well demands immense dedication and requires a diverse set of skills: movement, musicality and textual knowledge. It has been said that the art form takes more than a lifetime to master.

Many attempts have been made to pin down the precise definition of capoeira in its multiple forms. Is it a dance, a game, a sport, a fight? Does it always represent a form of resistance to oppression (historically) or is it merely a kind of theatrical show for the purpose of entertainment?

For those who teach and maintain the art, a primary concern is the beauty of the game itself. Hence, the descriptive use of the popular phrase “jogo bonito” (beautiful game).

The first order of business for capoeiristas is to create the necessary conditions for the game to occur. Without music, there is no capoeira. The sounds of the bateria (the group of musicians that accompany the game) provide an integral structure and harmony for all that transpires in and around the “roda,” translated as “circle.”

Through rhythm, the players interact in movement, and the surrounding spectators become participants – as musicians, hand-clappers or chorus. As part of the circle, no member of a roda can be a passive observer.

The participation of all in unison is necessary to give the roda its particular “energy.” The value of democratic participation is central to the practice.

The body movements of capoeira are broken down into a relatively simple set of basic vocabulary and grammar. From these movements develop the body-dialogue that is acted out in the game.

While there are no official rules, it's well understood that actions like grabbing, punching or wrestling are strictly prohibited. Such actions are clearly aggressive and thus, defeat the aesthetic purposes of the practice. They conflict with the implicit values of capoeira by drawing away from a carefully crafted skill set and instead, demonstrate a lack of subtlety and class.

Etiquette and respect in the roda cannot be underestimated because of its relationship to the social values promoted in the capoeira world. By training a select vocabulary of movements, and avoiding direct acts of violence, capoeira offers an alternative model to other martial arts.

The emphasis is on skill and precision rather than sheer brawn or ruthless brutality. Etiquette provides the self-regulating mechanism for maintaining a peaceable roda.

If an advanced player is clearly more skilled than a beginner and finds more opportunities to execute attacks, it's bad form for him to play rough. The same applies to obvious differences in body type or gender. If, for example, a muscle bound six foot five man uses his longer reach and imposing size to direct a kick to the chest of a much shorter woman, he's obviously breaking a code of respect.

Aggression is part of the biological human make-up, a remnant of its evolutionary past. For people to live peaceably in society, it's essential to find methods for freeing this aggressive instinct.

Through graceful execution of swinging kicks, playfulness and invigorating physical exercise, the capoeirista liberates himself of these pent-up impulses, channeling them in a positive direction. In most games there is actually very little physical contact.

The play of combat produces a curious sense of catharsis that accompanies the closing of a roda. After all issues of antagonism have come and gone, players are left feeling relieved and emotionally flushed by the experience.

Training capoeira as a practical means of defense also reinforces self-confidence. Having confidence that one can defend oneself is of vital importance to a better quality of life.

The play of capoeira within the roda offers a sublime metaphor for life itself. People engaged in the watching and playing of capoeira feel they are facing issues of vital significance to their everyday lives. Issues of trust, pride, competition and respect become topics of conversation for the body-dialogue occurring in the roda.

In the end, capoeira is fun. It gives joy.

When I asked Mestre Amen of the Brasil Brasil Cultural Center in Culver City about his original motivations for training, I was surprised and moved by the simplicity of his answer: “It was something that actually made me happy.” As an adept of the art, I have to agree.