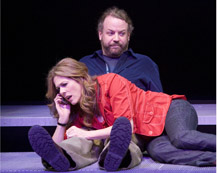 The new play at the Mark Taper Forum “Distracted” is about, well, being distracted. In this age of cell phones, video games and TVs, just to name a few gadgets that easily divert our attention, it's hard to stay focused on the task at hand.

Mama, played by Rita Wilson is worried that her son Jesse (played mostly offstage by Hudson Thames) has ADD (attention deficit disorder), or what is now called ADHD (attention deficit/hyperactivity disorder). He disturbs his classmates, talks back to his parents and acts like a maniac, in general.

Mama and her husband (Ray Porter), but mostly Mama, strive to solve their son's problem. The teacher is threatening to put Jesse in Special Ed and the psychiatrist thinks he should be on Ritalin.

After working herself into a frenzy, Mama decides to listen to the doctors and put Jesse on Ritalin. The boy experiences an immediate loss of energy and appetite. It's like he's a different person.

Dad doesn't like this one bit. He tries to convince Mama that he was the same way as a boy, as were dozens of other men and geniuses, as a matter of fact, when they were Jesse's age. Dad becomes so annoyed he even threatens to break up their happy home.

In the end, Jesse is taken off the Ritalin, and the parents decide to “deal” with their boy naturally.

What's hilarious about this performance is that everybody in the play is portrayed as being distracted, not just Jesse. The parents tease each other about being ADD. They can't sit still or listen to each other long before they turn on the TV or answer the phone.

The neighbors are either obsessive compulsive and/or high strung, and have their kids on Ritalin or a myriad of other drugs. One neighbor's daughter cuts herself, and her mom just keeps switching her drugs, advising her child to have faith that they'll find one or a combo that works. The girl is eventually sent away for professional help.

Then there are the doctors; one who's played by the awkwardly funny Bronson Pinchot. They too are easily sidetracked and plagued with their own problems. In his role, Pinchot jumps out of character to rave about Ritalin and how it helped him as an actor become more focused and successful.

The question at the root of “Distracted” is how to handle a wild kid who acts like a wild kid. Mama and Dad feel the pressure of society to get their kid in line, so that he's more productive and lives up to his potential. Neither want to be a bad parent by letting his negative behaviors lead him astray, but they don't want to be horrible parents who drug their kid.

Rita Wilson is superb. At 50, she looks fabulous. She is super-likable, while still being neurotic. You truly do want things to work out for her family.

What seems to have worked for her up until now – being productive, manic and on top of everything – may not be the answer to dealing with her kid's supposed ADD. It's just not that easy to fix a kid.

The one element that seemed to be sorely missing throughout the play, an emphasis on the mother-son relationship, is addressed at the end. In the last scene, Mama takes time out to spend with her son.

It's late, and he should be in bed, but she relents and allows him to come downstairs. They listen to Eminem, and Jesse dances around. He's happy again, like his pre-Ritalin self.

Mama has an epiphany. In order to win the war against attention deficit disorder, you have give your kid attention.