Richard Gere: Sets Us Up in The Hoax 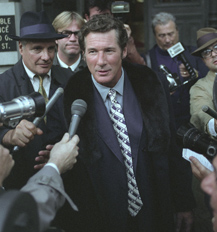 “Am I the oldest one in the room?” asks iconoclast actor Richard Gere as he surveys the room filled with journalists. “Yes, I am,” he laughs.

Many of the young film critics in attendance probably have never heard of Clifford Irving, the writer Gere portrays in The Hoax who almost got away with one of the biggest scams in publishing. The 2002 Golden Globe winner comfortably leans back, looking devastatingly handsome in black jeans and matching turtleneck, disheveled hair and glasses protecting his hazel eyes.

In 1971, Irving wrote the autobiography of aviator, movie producer and all-around mysterious icon Howard Hughes. This memoir was to be the greatest coup in literary history. Irving's research, notes and interviews were impeccable and appeared accurate.

The only problem was the whole book was a fraud. Irving never met the reclusive Hughes, who became more eccentric in his final years. At the time of his “interviews” with Hughes, Irving was living comfortably on the Spanish island of Ibiza manufacturing his masterpiece.

Irving fooled everybody at McGraw-Hill, the publishing house that agreed to Hughes' outrageous terms voiced through Irving and gladly wrote out a million dollar advance, which Sommers deposited in a Swiss bank account. It would have been the con of the century if Hughes did not expose Irving the night before the book was to arrive in bookstores. The revelation not only hurt Irving's pocket book – he had to repay the advance – but it demolished his credibility as well.

“I remember quite clearly, this was the early '70s, and it was a big deal,” Gere recalls. “It was on the cover of Time magazine. It was in the news constantly.”

“It was a bigger deal than anything else,” he continues. “So much so, when I made the movie American Gigolo in 1980, Nina Van Pallandt [Irving's then lover] was in the movie with me. I did ask her about it one time, but she didn't want to talk about it so I let it go.”

Gere, known for throwing himself into a role, had plenty of research materials to work with including miles of footage and audio recordings of Hughes and a televised interview Irving did before and after the fraud. He enjoyed the extreme lengths that Irving went to keep up the charade and wanted the film to reflect it.

Irving, whom the actor never met, was the James Frey of his day. Gere was simply in awe of Irving's bravado and the American public and McGraw-Hill for believing this incredibly bogus story, which rested on no actual proof that Irving ever conversed with Hughes. Irving's prior book, Fake! The Story of Elmyr de Hory the Greatest Art Forger of Our Time (McGraw-Hill, 1969) should have served as a clue about Irving.

“Now, why wasn't this a light bulb coming on to anyone else?” questions Gere with a chuckle. “There were so many things like this in this whole episode that any relatively rational person would go, ‘this doesn't feel right to me.' But at every point, people would solely need this to be true and have something to gain in it being true. They suspended their disbelief.”

Whatever Irving had said would've been believable because, as Gere says in the movie, the chances of Hughes coming out of his seclusion were unlikely. Even if he did, all Irving had to say was it was typical and expected of Hughes to deny anything. Everyone speculated about Hughes, so anything said or written about him, no matter how absurd, could have been true.

Gere believes that today people aren't as fooled by what is written about celebrities and political figures. They realize that most of the time the entire story is not being revealed. He reaffirms that “it's very important to understand that the volume of information doesn't mean that it's true or meaningful.”