The Prisoner Or: How I Planned to Kill Tony Blair: (Red Envelope Entertainment) 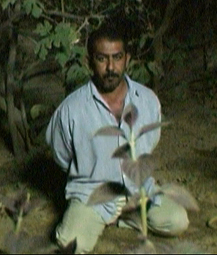 The ongoing war in Iraq is the global cause célèbre , from politicians and news outlets to pundits and filmmakers, but The Prisoner or: How I Planned to Kill Tony Blair stands as a singular accomplishment of gravity, humor and, dare it be said, level-headedness. What separates Michael Tucker and Petra Epperlein's stylistic documentary from more maudlin or acrimonious efforts ( Fahrenheit 9/11 anyone?) is its surprising grace and meditative tone that can galvanize an audience without resorting to propaganda, nationalism (or lack thereof) or opaque agenda.

The story centers around four Baghdad brothers – Yunis, Khalid, Abbas and Yaas – who are imprisoned by American troops acting on intelligence that the men are a bomb-making cell planning to assassinate British Prime Minister Tony Blair on his visit to the country. Yunis, a proficient English speaker and freelance journalist, narrates much of the action as he and his brothers are taken to a Baghdad police station and then to the infamous Abu Ghraib prison where they are held for nine months without formal charge.

Though the film benefits from home videos of the Abbas family and the embedded videography of Tucker as he followed his American military unit on “Operation Grab Ass” to capture the brothers, much of the story is told through interviews and comic-book styled graphics that illustrate Yunis's prison experience. These graphic representations are a marvelous touch that allow the film to present a cohesive, dramatic storyline without actual Abu Ghraib footage.

What separates the film from other agit-prop, anti-war sentiment is its focus and selectivity – specific perpetrators are named and condemned while other soldiers are praised for their decency – without blanket statements of guilt or innocence on either side. Tucker and Epperlein, within their vividly colored cartoon images, present countless shades of moral grayness in a country poised on the maw of madness.

The Prisoner renders a supremely competent picture of the absurd and appalling reality of Yunis's situation: interrogators bizarrely ask Yunis whether he likes Richard Gere or Harrison Ford and prisoners are loaded onto the “Happy Bus” which transports them to Abu Ghraib. Yet within the apparent hopelessness of the situation, the film still finds hope in the inherent decency and transnational brotherhood of its subjects.

One American soldier, Specialist Benjamin Thompson, is cited by Yunis as “a brother” who cared about the Iraqi people, helping to secure food and care for ailing prisoners. When interviewed, Thompson in turn suggests that Yunis and his peaceful leadership were the reason that Thompson's camp had the lowest rate of violence of the entire prison. This camaraderie, this sense that some good could survive in a prison infamous for its abuses of fundamental liberties, offers a slight but genuine hope that all is not lost.

When Yunis is ultimately released after nine months, the prison commander offers a simple “sorry.” To this day, the Army claims to have no record of prisoner No. 151186-Yunis Abbas.

Yunis returns home to his family but still wakes in the night to his memories of the soldiers counting off the prisoners each morning in the camp. Thanks to Tucker and Epperlein, his story and his burden need not be carried alone.