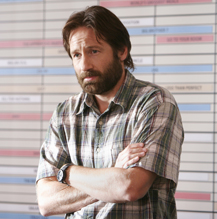 “Let’s face it – if you can’t sell 14 sluts in the Caribbean, you’ve got problems.” TV uber-executive Lenny (Sigourney Weaver) is ecstatic over the success of her network, nicknamed “the Panda” and its new show, “Slut Wars.” When each scantily clad contestant is kicked off of the series, she must put her clothes on in shame and leave through the adjacent alley. Despite its claims to comedy, there’s something inescapably depressing about writer/director Jake Kasdan’s film, The TV Set. While the ultra-competitive, brutal soullessness of the television business has been well-traveled in film (Paddy Chayefsky’s 1976 Network is the best example.), Kasdan’s uneven opus unwittingly eviscerates its own premise: if the televisual world tilts so badly towards the forces of indifference and selfishness with no hope of salvation, why should we even bother? David Duchovny stars as Mike Klein, a veteran scripter whose autobiographical new series, “The Wexler Chronicles,” is one casting session away from a green-light with the Panda. With Lenny and ex-BBC genius Richard McCallister (Ioan Gruffudd) offering their advice, however, Klein rapidly loses control of his deeply personal tragicomic story of his brother’s suicide. Saddled with a woefully incompetent lead actor and pilot episode director, Klein is soon pressured to abandon the central premise of his story, because “suicide is depressing to like 82 percent of everybody,” Lenny warns. Kasdan’s script is erudite and amusingly vengeful towards the Hollywood powers-that-be, but he has no answers for the problems he unfurls. At every turn, the rare do-gooders of the Panda meet with failure and disappointment, and while Network reveled in the absurdity of this cataclysmic TV world with warnings for the future of our boob-tube nation, The TV Set suggests that not only have the numbskull-panderers won, but maybe they were fated for victory all along. Duchovny gives an honest and restrained portrayal with absolutely no vigor that allows Weaver to walk all over him. This is art imitating life to the fullest: not only does Lenny get her way with “The Wexler Chronicles,” but Weaver gobbles up the screen from Duchovny at every chance. It’s the cardinal sin of The TV Set that we so often want the funny, vivacious and vacuous Lenny to stomp all over Klein. Indeed, Kasdan and Duchovny have made a critical error here – Klein and his deeply personal project, although portrayed truthfully and lovingly, never have a chance in hell of success. Rooting for the underdog is one thing. Rooting for an impossibility is something else entirely. There is one particularly telling scene of the film that illustrates Kasdan’s irreconcilable problem, as Klein returns from one of his disastrous meetings with the network and gives an impassioned speech about preserving the sanctity of his show and fighting the forces of apathy and mediocrity on television. His pregnant wife, ably played by Justine Bateman, reminds him that they will soon have two children to take care of and double the bills to pay. Such a conundrum – the balance between the family and the world they will inhabit – is one of the great challenges of every adult life, and to address it in 89 minutes is more foolhardy and depressing than brave. Kasdan’s story remains perpetually homeless: too bleak for comedy, too punchy for drama and just realistic enough to remind us of the outside world we paid $10.50 to escape. Grade: B-
Article posted on 4/2/2007
This article has been viewed 1628 times.