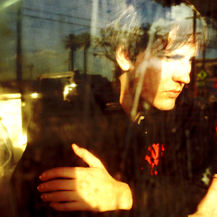 The Los Angeles hip-hop scene is a battleground for those willing to go the extra DIY mile to make it in a game ruled by only a handful of artists. Ivan Ives is one of these L.A. MCs. What makes him a cut above the rest is his distinctly defined persona.

He is first and foremost enjoyable. And, quite frankly, he's going to make it.

Before my interview with Ives begins, a harsh tap strikes his shoulder. As we're sitting in a donut shop, a clenched fist grabs his arm.

No worries, however, as no fisticuffs ensued in our “donut eating interview.” The perpetrator of the surprising greeting was an attractive woman Ives happened to know.

From donut shops to MySpace (12,184 friends in counting), Ives has garnered a strong and steady fan base. After an immediate listen to his lyrics — which move from introspection to surreal while flowing seamlessly via the smooth production of his main collaborator Stupidfresh — you'll come to realize one thing: you'll want to be Ives's friend.

Originally from Russia, Ives is a product of the working class that trained him for the “every day is a struggle” life of a young rapper. “The Proletariat,” off Ives' debut album Deus Ex Machina is the record's centerpiece; a grimy beat couples with the record's most insightful lyrics.

Becoming a newly reinvigorated proletariat, Ives gives perspective into surviving in the City of Angels and broken dreams (You have to work/You have to crawl through the fields and dig through the dirt) with no wealth, just music. For him, it truly is just that.

“I grew up on rap. I never really got into rock,” says Ives. “I think hip-hop is the genre with the most possibility for both expanding and moving forward.” It's surprising to note then that many of his fans are indie-rock hipsters. A duality rarely seen in a rapper's core audience, Ives relishes the fact that his music has reached many, from the hardcore hip-hop head to die-hard rock fan.

Still dedicated to what he calls the “art of true hip-hop,” Ives (with his new fan base) has been able to cross that line and flirt along the genre of indie-hop.

“I'm put in that category by default because I'm white and I have shaggy hair,” comments Ives. “I think a lot of indie-hop rappers are so focused on getting their trite message about the state of society out there that they compromise their flow and stray away from the true art of hip-hop. They try to fit so many words in each line that it all gets jumbled into an incoherent mess. The right thing to do is to find a balance between what you want to say and how you say it. That's flow. That's what I got.”

Besides having the innate skill to spit syllables with the greatest of ease, Ives has the heat, LA Heat for that matter. LA Heat offers an EP's worth of hype beats and lyrics that detail living in the streets of L.A., which for him is nothing new. But lately as he walks across the city's musical landscapes, Ives frowns on the state of music today, especially the music that bred him.

He notes, “Most of what's coming out right now is garbage – both in mainstream rap as well as underground hip-hop. I'm trying to clean that up.”

And though he may joke that his favorite rapper is himself, who knows, you may eventually be singing that very same tune. No joke.